I was nervous about Bangkok. This sprawling city bisected by the curving Chao Phraya River has a reputation. Just as I felt uncomfortable, and yet, in awe of the beautiful but promiscuous girl while in school, I suspected I’d be out of my league in Bangkok. No exaggeration, I spent hours and hours from home, searching the Internet, reading TripAdvisor reviews, zooming in and zooming out on Google Earth, dizzy from the effort to establish a sense of distances. Where should we stay? Near the river? Near the wats (temples)? How far was it from this hotel to that wat? The city had me stressed out long before our plane took off.

Dave and I asked friends for recommendations. Several suggested the Mandarin Oriental. Perfect! It was exactly what we’d envisioned, a place rich with history and character…at $500 per night. Ah well. Another friend suggested the Federal because it was smack in the middle of everything. Given what I’d heard about Bangkok’s sex shows and scams, I was leery about what “everything” meant. Many hotels listed online were towering new structures of glass and steel, shiny, modern, not what I wanted, not my idea of Asia.

My idea of Asia was exotic and ancient, shaped by storybooks and my grandmother’s tales about her travels in the sixties. So, perhaps my idea of Asia no longer existed, but I kept returning to the Shanghai Mansion in Bangkok’s Chinatown. The pictures showed a nineteenth century hotel with vibrant colors and traditional furnishings, but I hesitated because several TripAdvisor reviews complained of an unfriendly staff. In the end, I gave in, and Casey made the reservations while we were in Chiang Mai.

Our flight from Sukhothai landed in Bangkok around 7:30 PM. We collected our unwieldy packs, loaded up, and trudged to the information booth to plan our next step. What could have been a bewildering series of trains, connections, and tuk tuks unfolded smoothly as Casey and Karis listened to a list of incomprehensible names of streets and stops, repeated them clearly, received approving nods of confirmation, and led the way.

It was dark by the final leg of the trip, a tuk tuk ride to Chinatown. Dave and I were captivated by the Chinese lettering, the flash of neon, and glimpses of past elegance in Art Deco façades and wrought iron signs, but I longed for a restorative movie-style flashback to swab away the pervasive layer of grime.

The flood waters had not yet seeped into the streets, but the outlying areas were awash, so the inner city was on alert. Upon our arrival, we had to clamber over a four-foot high wall of sandbags barricading the entrance to Shanghai Mansion, but once inside: colorful hanging paper lanterns, a koi pond, red lacquer accents, pen and ink artwork, dark filigreed wood. My idea of Asia, still here.

Like loonies, we gawked at our exotic rooms. The tea set and fruit bowl on the sideboard. Decorative birdcages, parchment patterned wallpaper, embroidered green satin runners, a sinuous carved black frieze atop deep purple walls. We danced from the girls’ room to our own, cameras in hand, snapping away. Bangkok would prove to be a challenge, but Shanghai Mansion was a jewel.


Suspend judgment. Avoid comparisons to the familiar. Be open to experience and to others. By following these precepts, our travels have been enriched, but in Bangkok, it is not wise to let your guard down.

The day had been one of extraordinary contrasts. In the morning, we’d had a taste of the TripAdvisor warning about the Shanghai Mansion staff. When we asked the front desk clerk if the river boats were running, she said no. She did not elaborate or offer suggestions, nor was she helpful in answering questions. Her expression was set, eyes dark. Well, our rooms more than made up for it. We headed out to the street, hailed a tuk tuk and asked the driver if he knew of any river ride possibilities. Of course! Plenty of boats out there. He drove us to the docks…and the waters were rippling with traffic.

Apparently we had on our “I’m a sucker” tee-shirts, for Casey was aghast at the price quoted by the woman selling tickets. “It’s a scam. Ridiculous. Do NOT pay this,” Casey urged. Again, Dave and I were a disappointment to our daughter…and paid. For the not-so-unreasonable sum of $15 a person, we could board the boat as opposed to spending the next hour sweltering in the sun in search of a better deal. Casey was steamed…and proved correct in her assessment as we were charged an additional docking charge at every stop we made.

Hmm. Bangkok. Tricky. And I didn’t even mention the three-inch long cockroach that landed on my neck last night after dinner…

Shaded by the canopy of our long-tail boat, we were cool, our sweat-sticky skin dried by a breeze, as we glided past tiled pagodas, soaring spires, and a giant golden Buddha. We stopped to explore the legendary Wat Arun, grudgingly paid the docking fee - after a heated discussion with the attendant - and climbed the marvelous, steep, stepped, tower encrusted with brilliant pieces of porcelain.

After re-boarding, our navigator steered down a side canal. I’ve read that Bangkok has been dubbed the “Venice of Asia” because of its canals, but that’s a stretch. And because of the floods, the canals had risen in their channels, swamping the houses along the banks. One woman stood knee-deep in water in her doorway, hanging laundry to dry in the eaves. Two men sat in folding metal chairs, ignoring the water swirling about their legs. We’d heard that crocodiles and snakes were an added flood concern and kept a lookout for serpentine swells in the current.

Our ultimate destination was the white-walled Grand Palace and the temple, Wat Phra Kaeo. At the main gate, we discovered we had one hour until closing. Bad timing. We discussed postponing the visit, but Bangkok is huge, and our days, unpredictable. While we had no idea the degree of truth to that, we decided to stay and hurry. So we ran. Literally.

The guards were not impressed with our need for speed, nor with the girls’ shorts and bare shoulders. Casey and Karis were forced to make a detour to the tourist office to borrow appropriate cover-ups at the cost of precious time and a hefty deposit.

Once properly clothed, we ran up the steps, kicked off our shoes, as required, and dashed in to see the emerald Buddha. We zipped past garishly colored guardians, snarling and angry with their curved scimitars. We squinted at the gleaming gold chedi tower that houses a piece of Buddha’s breastbone. We whirled the length of the Grand Palace and watched the changing of the guard. Silvery sun rays escaped mounding gray clouds to illuminate spires, peaks and finials. Magic. My idea of Asia. But the crowds had thinned and uniformed staff were sweeping. “I don’t want to lose our deposit,” said Casey. “We’ve got to wrap this up.” Right. Next time, we’ll hit the palace first.

The scene outside the walls was disturbing. Murky water seeped from catch basins and crept down the road. We stood at the bus stop, eyes fixed on a spot on the sidewalk to gauge the rate of the water’s rise: how long before that spot disappeared beneath liquid fingers? Not long.

Naturally, the bus we wanted had pulled away just as we passed through the palace gate, and we had no idea when the next one was due. We stood and waited, exchanging anxious smiles with those around us, all of us tracking the advance of the water, watching as cars and tuk tuks plowed along sending waves splashing against the curb. How far inland might crocodiles come?

As pedestrians lifted their pant legs to cross the road, I wondered, would we have trouble leaving Bangkok? Day after tomorrow, the girls planned to take a train south to the islands and we were due to fly home. None of us wished to extend our stay. 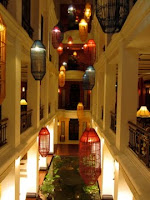 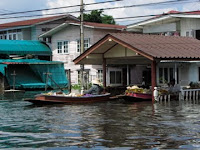 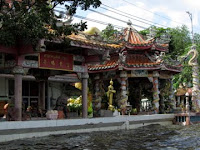 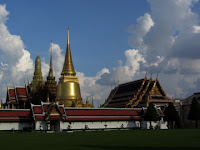 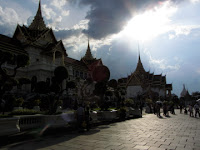 You use bigger words than me- pretty language!

The water fingers were SO creepy...ominous to say the least...

I agree with Casey - so nervous for your next post. Wndering if you made it back safely - :-)

Very 'pretty language' loved the post, you really make me see what you are seeing.

Sounds like you made it out just in time ... or at least I hope you did! I fell myself worrying about you, but you did make it home. I'm dying to read your next post!

What an adventure...can't wait for the next installment. This one ended with a real cliff hanger!

I think - yikes! get out of there fast - but then look at those stunning photos and thought -- why not stay? (you need to add some pics of all those Bangkok meanies you encountered!)
So.... ? Keep writing!!

I think that Life would be' so much easier here.... Waiting for you...! Xxxx

Although Bangkok is a city I've always wanted to see, its so different. Snakes and crocodiles? Yikes. Still, your trip was the experience of a lifetime.