My father, Paul, was tough on Santa Claus.  Mom, my sisters, and I would sit on the stairs in our nighties and robes in the morning on December 25 while Dad lumbered down to the living room to “make sure the fat man was gone.”  While surreptitiously turning on Christmas tree lights and lighting the fire in the fireplace, Dad would bellow, “Hey!  What are you still doing here?  Off!  Off you go now!”  Even as young believers, somehow we knew this was funny and not a rudeness that would send Santa off in a huff having snatched back our gifts.

Dad’s performance in berating Santa and chasing him away became ever more outrageous as we three girls grew older.  And Dad was still shooing the fat man when those gathered on the stairs included my own children and tiny nephews.  Is it totally pathetic to grow misty over such a memory?  Perhaps, but for all the lights, tinsel, jingle bells, and parties, Christmas is poignant, ripe with promise and heavy with expectation.  Like a snowball gathering size and weight as it rolls, the holiday carries with it the shadows and brilliance of years past.

Early this December, I drove to Pennsylvania to join my sisters in a green room vigil as my mother had surgery. The procedure went smoothly and, undaunted, Mom went to dinner and the theater with friends two days later.  So I headed home, free of worry, serenaded by a Christmas CD Dave had compiled.

My current favorite is a Don Henley song and when it played through the first time, I chimed in at the end of the chorus, then tapped the replay button on the dashboard for another round.  And then, a third.  I listened a mite and repeated the lyrics, striving to learn the words.  At some point, I keyed in to the message beyond simply singing along:

“Bells will be ringing the sad, sad news.
Oh what a Christmas, to have the blues.
My baby’s gone.  I have no friends
To wish me happy, happy Christmas, once again…”

No friends?  Ouch.  Not exactly jolly.  Time to move on; no more replays.  Johnny Mathis began to croon, “I’ll Be Home for Christmas” and I cruised vocally on auto-pilot, joining in on every word.  But you can’t miss the melancholy in that World War II lament as a lonely soldier longs to head home.

Next up, “White Christmas.”  In my mind’s eye, Bing tapped his pipe, tamped in some tobacco, and gazed with languid eyes into his pool of memories.  From some musical archive in my soul, the lyrics spooled forth as Bing and I sang together of tree tops glistening, sleigh bells in the snow, and Christmas cards.  Clearly Bing was wistful.  His Christmas held not those things; he was yearning for them, “just like the ones I used to know…”

When Dave toasts fresh breadcrumbs, chops black olives, and mixes them with browned garlic, olive oil, and lemon juice, he senses his Aunty Cam, deceased for seven years, watching over his shoulder and nodding her satisfaction.  As he reaches to the top of our tree to place an angel, crafted in 1986 from a barely disguised toilet paper roll, we picture little Tucker, the artist, leaping about in anticipation with his sister, Casey.   On Christmas Eve, as is our tradition, Dave and I lie in bed, reciting “The Night Before Christmas,” and I remember my father with my kids in his lap, reading them the same story.  So many snippets from the Christmases we used to know. 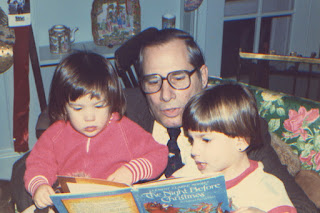 When I was a kid growing up in the fifties, tree lights were universally multi-colored, but ours glows now, magical as a snowy Christmas, with tiny white lights.  Its prickly green fingers display shimmering glass icicles and decades-old ornaments.  Many hands have crafted the satin peppers, rustic calico creations, clothespin dolls, and salt-dough figures tucked among shiny red and silver balls.  The eighties reaped a host of pieces personalized with Tucker and Casey’s names:  crocheted snowmen, wooden teddy bears, tiny sleds, and sweaters. Our grandniece, Ava, has provided our most recent acquisitions: a clay Santa face made from her handprint, and a glittery pair of Dorothy’s ruby slippers.  That is the way of family trees, whether balsam or genealogical, their branches fill with new additions.

And so it is this December, because this has been a richly blessed Christmas: Casey and her boyfriend, PJ, announced their engagement, and Tucker and his wife Lisa brought a new Paul into the family!  With a full head of hair and soft kissable cheeks, this little bug looks much like Tucker did when he was my baby.  And I miss my father on this fourth Christmas without him, but I know he is beaming from his spot on the heavenly couch. 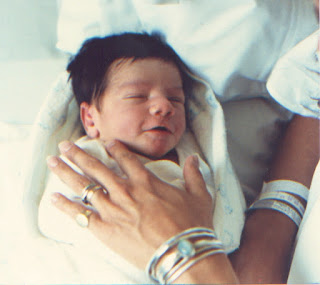 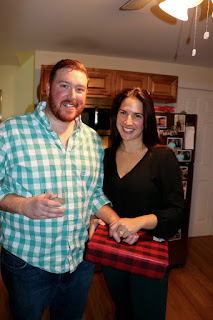 A lovely read Lea and heaps of love and blessings for your precious grand-baby and Casey's engagement!
It is a happy New Year!!! xo

Lea, what wonderful memories - you have such beautiful ways with words! Happy New Year to you al!

A perfect Christmas that you will remember forever! So much happiness. And I am sure your dad is beaming with pride for his great grandson and soon to be grand son-in-law.

Congratulations! He is beautiful! Before you know it, Dave will be reading The Night Before Christmas to Paul clad in his footed pjs! Traditions are so very special and really create such family bonds that can not be broken even when loved ones pass. Happy Happy New Year!

Thank you so much everyone! We are so excited to have this dear little boy join the family...and Casey and PJ's wedding ahead! Such blessings!

So sweet, Lea! Congratulations on your beautiful new Paul. I can't think of two more wonderful Christmas gifts than your grandson and Casey getting married soon. Much to celebrate. How wonderful.