Greed-driven policy enabled by power, ignorance, and ambition is dangerous to us all.  When Mr. Trump leaves the White House and returns to his chosen career in development, he will have – literally – cleared the way for his projects.

Trees and plants once protected by the National Environmental Policy Act will be flattened. Impervious surfaces once limited by regulations will pave greater swaths of land. Wetlands that collected and absorbed storm water will be filled. As homeowners and townspeople around the world grieve while flood waters surge, unchecked, through their streets, towns, and houses (unless they live in a zone consumed by flames) the president is seeking to diminish the very systems Earth has in place to minimize disaster. When discussions with Trump supporters invariably turn to their satisfaction with the economy, I want to scream, but what about our grandchildren? What about our fellow creatures?  What about the PLANET?

So, on Saturday, Dave and I took the train to New York for the closest massive group hug and support system around, the Women’s March. We bundled up in multiple layers, the coziest of socks, sweaters, and coats.  Of course, I wore my pink pussy hat, my talisman, uniform, and sign of solidarity. 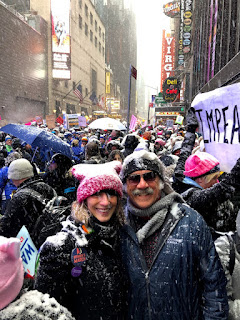 The soft-white skies promised snow, and the thermometer read 24 when we left the house, but we never felt the cold as we joined the thousands gathered in Columbus Circle. With cries of “Shame!” we admonished the local structures that symbolized this administration’s hold on our country: Trump Hotel and the FOX News building. A drum corps roused us to exuberant dancing while we chanted, “Tell me what democracy looks like!  THIS is what democracy looks like!” It was a raucous sea united in anger and worry, but also, in a belief in equality, justice, love of the planet, and hopefully, in a broad sense, love of each other. 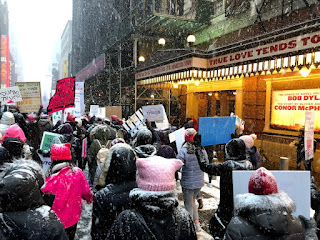 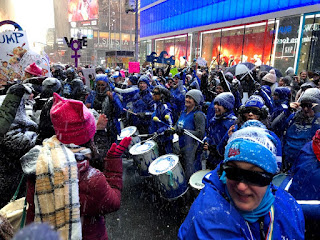 Right on time, 1:00 PM, a light snow began to fall, a benediction of white confetti, swirling from the heavens, dusting shoulders, scarves, banners, and pussy hats. Men and women of every age and color brandished signs reflecting my own frustration, fury, and fears, yet the vehemence, energy, and optimism of the young gave me hope as they held high their declarations: “Respect Earth” “Not my America!” “If you build a wall, my generation will knock it down,” and “Little girls with dreams become women with vision.” 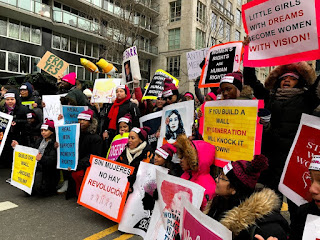 As Trump careens forward, blundering into increased hostilities with Iran and trashing decades of alliances and environmental protections, I (correctly accused of being a bleeding heart liberal) am stymied by loyalty to labels. What could be more conservative than demanding clean air and clean water? What could be more Christian than compassion toward others? What could be more universal than the wish for a nonviolent future and healthy planet for our grandchildren? How can voting for a party mean more than these?

The Senate impeachment hearings are underway, and my prayer is that the senators will be humbled by the solemnity of their duty. That they will assume the mantle of responsibility, honor their oath before God to be impartial jurors, call witnesses, and consider the testimony presented. As one sign at the March entreated, “Silence now is not a privilege… it is a betrayal. Listen. Be brave. Speak out.” 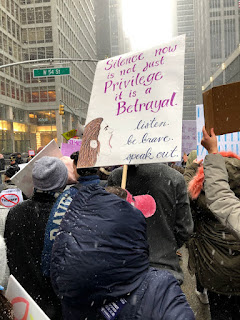 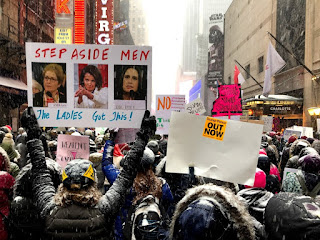 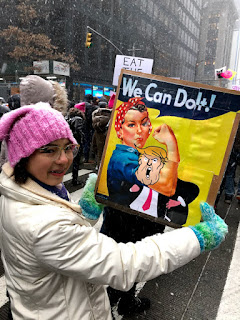 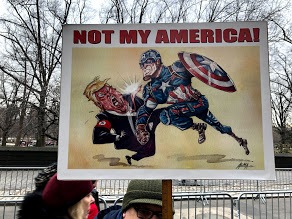 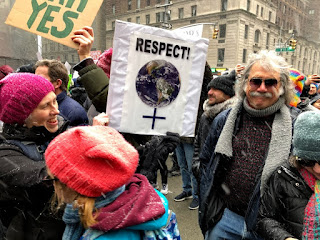 Thanks for this piece, Lea. You know I was marching with you and Dave in spirit. This is indeed what democracy looks like! Take note Littles. XO

Wonderful, Lea! Used to hear from your Mom every time you marched...just so proud of you! And grateful too. Old age is not for marching but I certainly cheer you on! You give me hope.....no small gift!
Beverly

Glad you were there - good placement by FOX news. Your writing captured the scene - thank you for going AND writing about it. I went to the Santa Rosa gathering (about 1000 men and women) and took Zaylie for the first time. After I explained to her that the current president was a mean person who did not care about women and children and families or Mother Nature, she wanted to know how he got there. How do you explain the electoral college and Russian bots to a 4 1/2 year old? But we made a sign on site that said "WE WANT A NEW PRESDIENT" with stickers and a marker drawing of a beach and sun. I am praying for the next Democratic president in 2020 - whoever it is!

and you have spoken!
Thank you

Couldn't agree more with everything. My fear is that the impeachment (and I"m assuming acquittal) will embolden him. There's nothing to stop him as long as its a Republican senate. I also worry about him getting a second term and what he'll do. Sorry for being such a Debbie Downer, but those are real concerns. Scary times.

I agree, Laurie! They ARE real concerns. My anger and incomprehension is focused equally on those who continue to support him. They see and hear his disjointed rants, his childish insults, his claims that "he can do whatever he wants," and they know he's a danger to democracy, but do nothing. We're all in trouble if they don't act in public on what they whisper in private. And I fear the "adults in the room" have either been fired or quit. If you haven't already, read the Washington Post article, "'You're a Bunch of Dopes and Babies': Inside Trump's stunning tirade against the generals." Jan. 17.