COVID Question: What Is Okay?

Our daughter had come by with a card and a plant to wish me happy birthday. Dave and I had greeted her from the door, and as was true the other time she visited during quarantine, she’d stopped in the yard, well clear of us.  This day, however, was rainy and cold.  It felt wrong to have my girl right in front of me, on my birthday, standing outside in the rain. “Don’t you think it would be okay if you came in? We’ve been really careful and so have you…” I wanted her to feel welcome, but under no pressure.

Usually, routines and schedules comfortably disguise the fact that uncertainty is part of life. Now our cruel teacher, COVID, has arrived, without warning, no end points, many questions, and inadequate tests. In the absence of clarity, almost everything requires caution, even a visit from a daughter.

Casey was wearing a form-fitted mask over her nose and mouth. And while eyes are often called windows to the soul, recently I have found, through numerous masked interactions, that the rest of the face plays an essential supporting role. Smiles communicate themselves to the eyes somewhat, but not in full; “I’m smiling at you!” I’ve felt compelled to say to cashiers and those I encounter at the store.

Through her years of involvement in theater, Casey is practiced in exaggerating facial expressions; her eyebrows alone can tell a story. But as she stood on our threshold that rainy day, I missed seeing the smile hidden under her mask.

“Do you think it’s okay if I put my arm around you?” I asked.  I was pretty sure she’d say yes, but she has baby Eleanor at home, so we’re acutely conscious of the risk of infection. Twice, when two weeks had passed since the last grocery run, we planned a visit… and backed off.  But why wouldn’t that be okay? With both households in quarantine and plenty of hand-washing? The thing is, six-foot distancing would be impossible with the baby, and masks would be an invitation for curious little fingers; we’d have to feel comfortable about hugs and kisses. Tucker and Lisa and their kids live in Boston, so for now, seeing them is out. But Eleanor’s close by, and it’s tempting.

Casey agreed to the arm hold, and so in a bold, break-out move, I gave her a one-armed… hm.  What was it?  Not a hug, not a squeeze, just an awkward gesture that one might give an acquaintance for a posed photo. What a departure from our usual full-bodied, I-Love-You hugs. 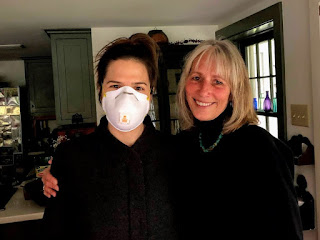 We moved to the den where an end-of-April fire was blazing in the fireplace, and that’s when she asked if it was okay to sit. Again, Dave and I spluttered with invitations and assurances, the anomaly of it all sparking our over-abundance of “Sit! Yes!  Sit!  OMG, of course!  Sit!”

Casey had groceries in the car so we knew the visit would be brief. Obviously, we also knew she’d been to the store.  Hmm.  I'd touched her coat… I better wash my hands.

Not wanting to convey even a whisper of concern, I rose without announcement, leaving Casey and Dave to chat. In the kitchen, I turned on the faucet, but kept the force low, hoping they wouldn’t hear it. I didn’t want my daughter to know I was washing my hands because I touched her.

I returned to my seat and maybe ten minutes later, Casey said, her voice slightly muffled because of her mask, “Mom.  I'm thinking... you should wash your hands because you put your arm around me.”

“Done,” I said without Guilt or Apology, my frequent emotional companions, but I couldn’t escape the sadness of the situation.

It is easy for me to be grateful, to count my innumerable blessings. I am keenly aware of the contrast between my enviable state and the horrors and heroics facing others. Mostly, surprisingly, and perhaps shamefully too, I feel cheerful. But the reality comes in waves, sometimes fanned by Guilt and Apology brandishing a heartbreaking article or unnerving news, and more often, simply from missing my people.

I will never take hugs for granted again.
Posted by Lea at 12:07 PM

WE WILL HUG AGAIN !!! Great post, BB. Love to you guys. I've not given up on my summer trip to the USA, not yet On verra.
xoxo Mere

I am too teary. IIIII am heart a wrenched for you and Dad to not be with Eleanor. And me. It seems so mean to have all of this time where we could be spending time together (like a second maternity leave! yay!) and cannot. Its too mean. And at the end of the day, yes. we are so lucky and so fortunate to BE HEALTHY and have not seeing each other be the worst of the worries. Ugh. So weird. I miss you.

Lea, So beautiful. What a great example of a strange, surreal time. Will we ever go back to the way it was? Or will there be some strange hybrid of then and now? This post is so poignant. All the best to you and yours. Stay healthy.

All of your insights are feeling vivid as we approach Mother's Day. We, too, are so fortunate to all be healthy. And we'll be able to zoom with our kids tomorrow, which will be fun. Yet it's not the same as having them right there and being together as a family. Looking forward to the day when we can spend some time and not have to worry about spending some time It will come!