Rain dripped from sodden umbrellas and streamed off cheap plastic ponchos hastily purchased from vendors along the march route.  It was cold, yet the woman wearing the red cape, star spangled shorts, crimson bustier, tight blue leggings, and gold tiara of DC Comics’ Wonder Woman seemed still to brim with energy.  As those marching for Science on this wet Earth Day 2017 wearily reached their destination in the plaza before the Capitol, Wonder Woman leapt onto a retaining wall to take a selfie with her friend.

Dave and I had spotted a number of full-bodied tyrannosaurus costumes and bushy white Einstein wigs, their connection to science clear, but a comic book super-heroine?  Not so much. Still, part of the Science March experience lay in appreciating people’s creativity and cleverness in conveying whatever message compelled them to come to the nation’s capital this day. So I asked Dave to hold my poster and umbrella, and darted over to the wall to take a picture of Wonder Woman.  Then, Dave and I trudged off in search of the nearest Metro stop.

Once on the train, blissfully warm and dry among other tired marchers still clutching signs with ink now weeping, Dave and I pulled out our phones, and like those around us, began to swipe, swipe, swipe through our photos, re-living the day.  Only then did I look closely at the photo of Wonder Woman and thought to enlarge the picture so I could read her poster.  “Breast Cancer tried to kill me, but Science…”

Saved her.  Made her strong again.  And made her Wonder Woman in the eyes of those who loved her… just as science gave my doctors - Mary Pronovost, Anke Ott-Young, and Barry Boyd – the tools and knowledge to save and restore me. 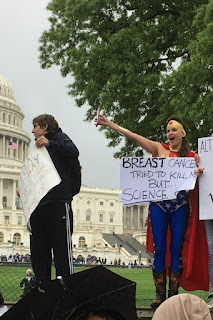 During these times when government support of climate science is of major concern, I hadn’t given much thought to the sweep of science… and to its direct, life-saving impact on me. Science is not separate and abstract. The people in lab coats hunching over microscopes have helped us learn what makes us function, what makes Earth function, and what it requires to ensure that our individual and planetary systems thrive. Why, in 2017, would those in power choose to deny and underfund these?

The day before the march, Dave and I had arrived in Washington leaving enough time to tour the monuments and memorials on the National Mall.  We scanned the seemingly endless lists of names of those lost etched in the Viet Nam Memorial.  Read the words of Nimitz and Truman inscribed on the wall of the WW II Memorial. Observed the haunting figures of shrouded soldiers drifting past ghostly images of departed service people gazing from a polished granite wall at the Korean War Memorial.  So many sons, fathers, daughters, mothers, and brothers – cherished loved ones – sacrificed in war after war after war.

At the exhibit below the Lincoln Memorial, I spotted a woman, apparently bald, wearing a scarf.  I approached her and asked if she was going through chemo treatments, and she said yes.  Briefly, we shared our experiences and found that Herceptin was part of both our regimens.  When I had breast cancer in 2009, Herceptin had been available for only eighteen months.  From my understanding, this drug made all the difference in my prognosis.  I hope science will help this woman, too, evolve from a scarf-lady to Wonder Woman.

After a wonderful overnight visit with my cousin and her husband, Dave and I arrived on the mall at the Washington Monument Saturday morning. We had passed through the security checkpoint, jumped over puddles, and gingerly tip-toed through swaths of mud to join the umbrella-sheltered throng before the stage.  “Can you believe this?” said Dave.  “It’s 2017, and we have to march to support Science?  What the hell?”

What the hell.  But the Trump administration has proposed massive cuts in jobs and funding at the Environmental Protection Agency (EPA) and National Institutes of Health (NIH), so march we must. 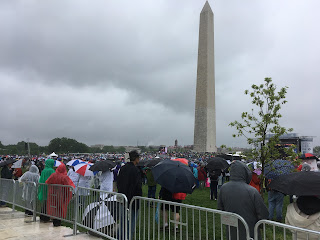 The first Earth Day in 1970 targeted pollution and led to the regulations that have cleaned our air and water and protected endangered species.  Since then, April 22 has been a day for concerts, school-organized clean-ups, and reminders to recycle.  It has been a celebration of strides made and incitements to improve.  This Earth Day was different, dire, and much like 1970, a warning that failure to act – or worse, to reverse gains made – will threaten the future.

Dave and I stood beside a tyrannosaurus to watch videos of polar bears, penguins, and whales gracefully diving deep below murky blue waters. 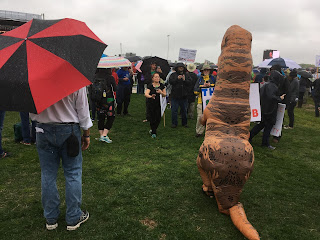 We listened to Bill Nye, the Science Guy, who concluded his talk with a stirring call for “informed science.” Astronaut Mae Jemison spoke of the power and beauty of seeing Earth from space.  Maya Lin, designer of the Viet Nam War memorial, described her next project, “What is Missing?” which she said would be a “wake up call and call to action… we must balance our needs with those of the rest of the species on this wondrous planet.” Denis Hayes, organizer of the first Earth Day in 1970 and founder of the Earth Day Network, warned, “If we lose this fight, we will pass on a desolate, impoverished planet to future generations.”  As numerous posters stated, “There is no Planet B.”

Jamie Rappaport, president of Defenders of Wildlife, reminded us, “Extinction is forever.”  Because of the Endangered Species Act, itself endangered under this administration, the bald eagle and manatee have been saved.  “Without science,” said Rappaport, “there will be no Monarch butterflies, no polar bears, no red wolves.  Science, for these, is literally a matter of life and death.” Opening with, “I am a patriot.  I fight for spacious skies and purple mountain’s majesties,” James Balog stated, “I am a photographer and scientist, and I have photographed the visual evidence of epic changes…  I have seen it…  Nature isn’t natural anymore.”

Christina Figueres, Executive Secretary of the UN Framework Convention on Climate Change, said, “Did you know that in Kentucky, they just put the largest solar farm in the world on top of a coal mine?  We are getting there!  We just need a collective intentionality to curb carbon emissions by 2020.  Can we do that?  Of course we can, because we don’t have another option.” She spoke of a vision she has had of hundreds of eyes staring at her and asking, “what did you do?”  She added, “This is a question for all of us.  The answer must be that we work together to do everything we know that is necessary.  In that lies the future of mankind.”

The future.  The future was a drumbeat conjured, portrayed, and agonized over. Many speakers spoke of their children and grandchildren.  Climate change is not in question; it is here.  And while the Great Law of the Iroquois urges consideration of the effect of all decisions even unto the seventh generation out, current plans to curb environmental regulations will affect not only our unknown descendants, it will affect those we know and love… our littlest ones - baby Paul, Ava, Rob, Hazel, Miles, Bennett, Isabel, Sam, Finley, Lily, Lila, Henry, Victoria, Jake, and all children, many of them attending the march.  Some slept on parents’ shoulders, sheltered under umbrellas.  Others peered curiously from beneath stroller canopies.  Still others stood rain-spattered and proud, holding their own hand-lettered signs.

Many scientists, science teachers, and science students attended the event, and the tone and subject of chants and posters reflected that. There were proud cries about democracy in action, but also calls and responses of: 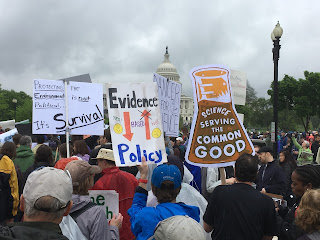 The pink pussy hats of January’s Women’s March were few, replaced with artfully crocheted caps of twisting coils of gray brain matter.  Posters bore renderings of formulas, graphs, and charts that left Dave and me scratching our heads.  Geologists proclaimed “Geology rocks!” Researchers and doctors demanded, “Fund the NIH!”  Molecular biologists wore elaborate spindly constructions on their heads that we took to be models of molecules, but like I said, we were out of our league in this group.

Like Wonder Woman, many attendees held posters thanking science for cures or listing torments science has consigned to the past.   “Got Polio?  Me neither!  Thank science!” and the more expansive, “Thank a scientist for: antibiotics, polio vaccine, chemotherapy, clean air, clean water.”  Countless posters held images of our beautiful Earth, some with an arrow pointing at the planet, stating, “I’m with her!” 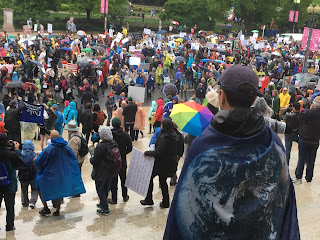 Humor helps power a message without a finger wag, and Dave and I chuckled often as we wandered about to read signs and keep warm:

“It’s not rocket science…well, actually, some of it is…”

“What do you call a massive solar energy spill?  A nice day!” 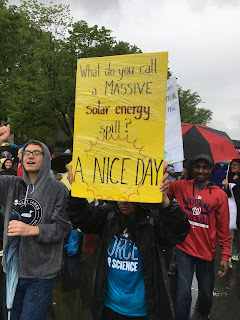 “Girls just want to have fun…ding for scientific research” 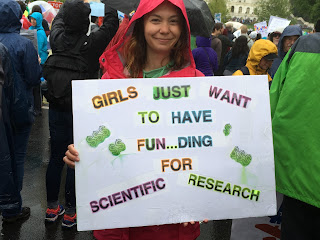 A man and woman standing side-by side held Dave’s favorites.  Her poster read, “Science saved our relationship;”  his said, “Without Science, I’d be bald and flaccid.” 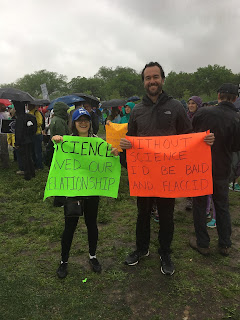 The presenters onstage were an organized and disciplined lot.  They kept their words succinct and focused, and when the scheduled march time  - 2:00 PM - drew near, they wrapped things up. At the last minute, the moderator announced a final send-off and blessing: a tweet from Pope Francis.  A tweet of all things, praying, “Lord, bring healing to our lives, that we may protect the world and not prey on it, that we may sow beauty, not pollution and destruction.”

With cheers for the Pope, chants of “E.P.A.!  E.P.A.!,” and a rousing chorus of trumpets and saxophones, the crowd surged forward.  We lifted our rain-wilted posters and flowed from the green by the monument down to Constitution Avenue… hoping that those in the domed and columned buildings within sight were watching and listening. 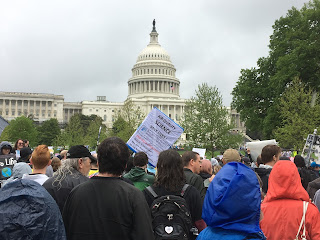 Lea,
Spot on girlfriend. Spot freaking on. Sent this to all my intelligent, thinking friends. Everyone needs to read about things from a personal point of view. Then the fact that you are an amazing writer can bring them in even closer.

Thank you for being a view into a most critical day.

Science touches us all. How can the powers that be actually think that it's NOT important??

You're right....how can they not? Dave and I keep saying that to each other. The president has grandkids...I imagine his cabinet members and congresspeople do too....how can they not plan ahead for their kids' future? It's inexplicable.

Thanks for marching for us all. It is just unbelievable that such a march even needs to take place in this day and age. The powers that be are totally clueless idiots.