Dave and I had consulted an oversized atlas to get a sense of locations and distances when we began planning our trip west.  Geography is not my strength, and while Dave retains his fifth grade ability to recite the states and their capitals, we needed visuals to figure out travel times.

The genesis of this journey had been an invitation to join Edie, my friend-since-birth, and her husband in Bend, Oregon, so that was our ultimate destination.  Since we were heading their way, we wangled visits to our friends Princie and Bob on Bainbridge Island, and my cousins in Seattle. Those were the dots we had to connect.

With ruler in hand, we played with a variety of routes, decided on a southerly course with stops at Zion and Bryce National Parks, and sent our thoughts to Edie and her husband, Dave.  Yes. Another Dave.  This could get confusing. Shall I call him Dave #2 for clarity’s sake?

Dave #2 emailed back applauding our ambitions and suggested a stop at McMenamin’s Edgefield Inn if we had time, so I Googled the inn’s website.

Picture me, hands on the keyboard, mouth agape, eyes wide in wonder, gazing at the glories of the McMenamin brothers’ vision.  This could not all represent one location.  But yes!  A county poor house transformed into a charming inn. A winery, distillery, and brewery on site.  A meandering soaking pool, gardens, and restaurants!  Bless you for the suggestion, Dave #2!  This place was a must.

I called the reception desk at the inn with the dates that would work into our tentative schedule. None were available. With desperation in my voice, I pled, “Do you have anything from July 16th to the 28th?”

Forget the southerly route! The eons-carved crags and red spindles of Zion and Bryce could wait!  “I’ll take them!” I cried, thrilled, grateful to this young woman, my new best friend.

Abandoned schools, failing hotels, former power stations: the McMenamin brothers saw brew pubs and restaurants where others saw fodder for wrecking balls.  In the 1980’s, vagrants, rats, and a legendary black rabbit had taken over the 74-acre property that became The Edgefield Inn. A county poor farm during its earliest incarnation, the land and buildings also did time as a prison and nursing home. In 1985, it was doomed to demolition when the Troutdale Historical Society intervened, hoping to find a buyer who would revive and restore the site instead. Mike and Brian McMenamin took on the challenge, infusing the decrepit building with new life… and providing a wealth of canvas space for local artists.

The moment our Uber dropped us off in front of the inn, we were entranced.  The Victorian red brick façade with its wide porch and rocking chairs begged us to pause, but there was time for that later.  We couldn’t wait to explore. 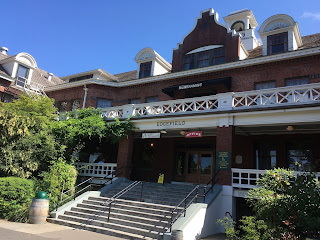 We checked in, chattering like fools to the receptionist about skipping the wonders of Zion and Bryce in favor of Edgefield.  She gave us our keys and a map of the campus, and gestured toward a cask of chilled, flavored ice water in case we needed refreshment before heading to our room.  Lovely!

Off we went, rolling our bags down a long hallway, slowing to stop and stare as we noticed the murals painted on every surface.

Who knows how many indigent souls, wayward individuals, and neglected seniors worked the surrounding fields, slept on narrow beds, and ate in communal dining halls over the years? What did they long for?  What were their dreams?  What paths had they followed to this place outside Portland?  With paintbrushes, full hearts, and imagination, area artists sought to portray their conceptions of the fantasies and realities of former residents on every door, beam, pillar, and hallway throughout the inn. 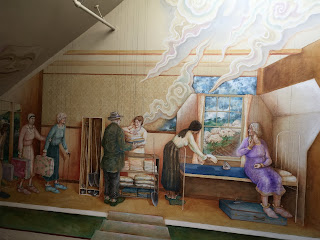 A gray-haired woman spinning in a corner while dancers whirl by – her past?  A black man sipping his coffee, alone while surrounded by others - his present. Newlyweds sneaking a playful peek at a cottage encircled by gardens - their future? Every image tells a story rich with the yearning, sadness, humor, and hope of life’s phases. 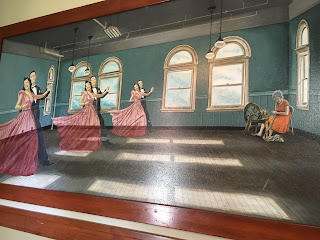 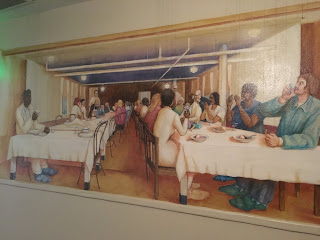 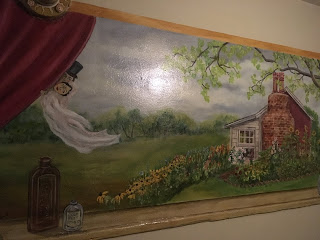 It was sweltering hot, and we’d spent much of the day seeking out shady spots beneath vine-laced trellises in the vegetable garden, on benches tucked beneath trained shrubs in the flower garden, and finally, on stools in the air-conditioned tasting room of the winery. The pours of Black Rabbit Red and Black Rabbit White were delicious and generous.  We lingered, chatted with our hostess, Cat, and purchased a case of wine to be shipped home before heading back out into the merciless sun.

A refreshing dip would be divine, but the only pool - a sinuous, salty, river pool that wound beneath wrought iron bridges and between startling stalks of orange flowers and giant ferns of deep green - held water heated to 100 degrees.  Still, the mind plays powerful tricks, and that pool called to us with the smooth, silky wiles of a seductive siren.

We donned our bathing suits and cover-ups, deciding to pass on the complimentary white robes provided in our rooms.  At poolside, we ducked our heads under trailing vines to purchase some tasty rum drinks at a diminutive hut before strolling the length of the pool. Given the heat and lush plantings, we might have been in the tropics. Oh, the water looked inviting, but even a toe-touch was intimidating.  That water was hot.  But it was, as anticipated, wet, and once we eased ever so cautiously beneath the pool’s surface, the air felt comparatively cool. 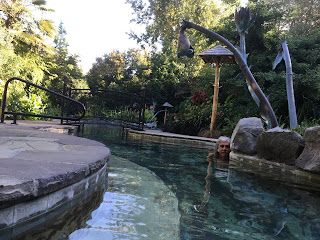 We’d settled in a spot around the curve of a bend, just past a small island erupting in gaudy flowers and towering bronze lotus blossoms.   Laps were impossible, given the heat of the water, so we lolled languorously, sipping our drinks, and watching people come and go.  We would’ve noticed Stu under any circumstances.

Even swathed in his white robe, we could tell he was a big man, tall and sturdy.  His dark hair was shoulder length, blunt cut, and parted in the middle.  He took long, slow strides as he and his lady friend crossed the bridge and set down their drinks just down the way from us.  The four of us exchanged smiles and nods as they took off their robes.

With curly, blond hair and the creased skin of a smoker, Pamela was slender and fit, about 50, I’d guess, and she wore her bikini well.  Stu was wearing a woman’s black two-piece bathing suit.

While partially naked and sharing warm water in close proximity to others, things can go either of two ways: one can ignore or engage.  Dave and I always choose the latter.

For close to two hours, as our skin turned raisin-wrinkled and the water’s temperature receded from conscious sensation, the four of us chatted about area day trips, our jobs, kids, and politics. Pamela was clearly smitten with Stu, stroking his back, nibbling his shoulder… and of course, we were fascinated.  What was their story?

She was a nurse; Stu, a doctor. Both were Canadian and disillusioned with Trudeau; they felt he was immature and incompetent. But in that contest of leader critiques, Dave and I were pretty sure we had them beat. Yes, they had to concede, Trump was worse.

Dave and I were bursting with questions... about Trudeau and healthcare in Canada, of course, but above all we couldn’t help wondering what that bathing suit meant for this man. His name, build, and voice were masculine, as was his demeanor, yet at one point, Stu volunteered, “Imagine trying to be transgender in Toronto…”

“Not so well,” was Stu’s answer, not enough of an opening, we felt, to ask more.

But what did that matter? In restaurants, trains, ruins, and hot tubs from Florida to Thailand to Rome to Troutdale, we’ve found people to be friendly; they want to connect. There is always common ground.
Posted by Lea at 1:10 PM

Your new career in writing. Suspense!

Such a delightful visit. The artwork is impressive. The stories they tell.
And yes...I want chapter 2 of Stu's saga. What a journey he is having. I can't imagine the journey these men and women make. As hard as their journey in the "real" world is as they make this transition, imagine how much pain they must have been in to live as the "wrong" gender and ultimately make the decision to transition.

Victor and I LOVE McMenamin's Edgefield!! So happy for you and Dave that you discovered this magical place as well. We have made several trips there, often going out of our way. Thank you for bringing me back!

Re. Gail's comment, yes. Dave and I have spoken of that as well. Most of us struggle with our role, our identity in some way...to add the enormous question of gender identity and seek alignment - with all the challenge and change that would entail - would take tremendous courage....fueled by enough pain to warrant those efforts.