After a glorious scenic overnight train ride through the Columbia River Gorge, Dave and I arrived at the tiny depot in West Glacier, Montana. Early the next morning, we drove our rental to the Apgar Visitors Center, parked, and asked a ranger for suggestions given our lack of rigorous hiking experience.  He directed us to a series of shuttles that would take us up the Going-to-the-Sun-Road to the Hidden Lake Trail.

My, what a mixed crew marched this accessible route with its enticing name and a trailhead conveniently located above the visitor’s center and restrooms! Seasoned hikers wore safari hats and leather boots and carried walking sticks. Dave and I carried no poles, but wore sensible layers, sturdy sneakers, baseball caps, and fanny packs stocked with sunscreen and water.

Teens, nimble and spirited, scampered along, shrieking with glee and tossing snowballs scooped from patches of snow.  Some sure-footed souls had opted to wear flip-flops and sandals. Amish nature enthusiasts wore flowing dresses, aprons, and bonnets, and an Indian contingent breezed along in elegant saris. Parents trucked babies in backpacks and held the hands of little ones clutching just-purchased stuffed grizzlies and mountain goats. 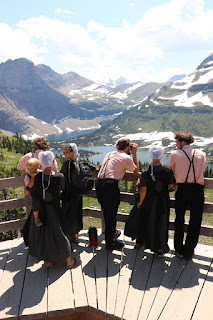 Alpine meadows swept to the foot of striated, craggy mountains. Swaths of snow and stony soil alternated with grasses awash with yellow wildflowers. Towering clouds, puffed and important, mounded overhead. And look!  My God! Look!  A mountain goat! Soon after, we spotted a shaggy mother nuzzling her baby, a snoozy goat under a scrubby pine, and a herd of seven picking their way across a snowfield high on a peak above. Like the bison of Yellowstone, beasts at first remarkable to those accustomed to squirrels and deer, the goats soon became an expected, marvelous, part of the scenery. 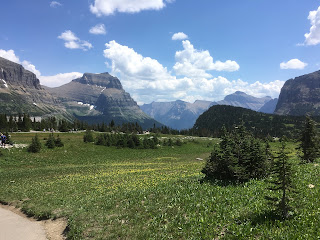 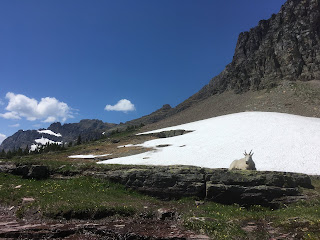 Every wildlife sighting spawned a gathering of pointers and admirers, so no passers-by missed anything. I loved the wish to share wonders, and the elevation of animals to Park Stars.  They aren’t “game,” a nuisance, or something to “harvest”; they are the rightful, extraordinary inhabitants, and all humans trooping the Hidden Lake Trail joyously celebrated them together.

But often, when it comes to nature, many people seem to have lost sense and instinct. At one point, the trail narrowed and climbed, with steep drops to left and right. It was one-way only, and slippery with smooth, hard-packed snow.  Crossing required caution, so lines formed on the ascending and descending sides as patient hikers awaited their turn to inch forward.

Suddenly, a young father with a babe in arms and toddler in tow started to run down the path.  A cry went up, and we stretched our arms, as did everyone else down the line, to catch and steady him and his children as they slid, tottered and careened.  Maybe he was trying to be thoughtful by rushing to spare those waiting, but seriously?  Strangers’ arms prevented a terrible fall.

Joy, awe, and effort combined to steal breath as the trail wound on and up to the overlook with its spectacular vista of Hidden Lake and Bearhat Mountain. A thin rope prohibited access to the next leg of the trail down to the lake.  A sign meant to instill a healthy keep-away response read, “Entering Grizzly Country!  DANGER.” If that weren’t clear enough, it went on,  “This Trail is Closed Because of Bear Danger.”  Of course two teenage boys sat smirking, bold in their bravado, just on the far side of the rope. 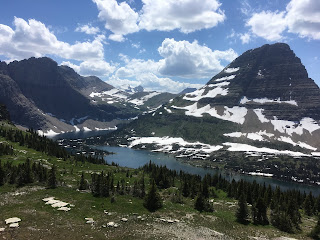 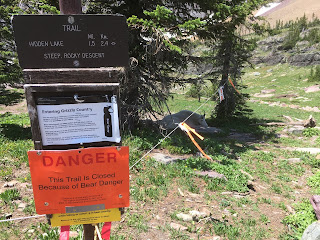 “A bear!” someone called, and every head swiveled.  The two boys lurched to their feet and scrambled under the rope in a hurry. All eyes followed the pointing finger, and scanned the shore of the lake far below. Far, far below. We searched, and then strained, to better see a tiny blotch at the distant end of the lake. It could have been anything. Several brown stumps had already ramped my heart rate with a confusing mix of joy-fight-or-flight, but this blotch was moving, and safely distant.

“Look!” An even smaller brown speck had appeared by the side of the blotch.  A cub!

Kind onlookers who’d had the foresight to bring binoculars shared this treasure, and we, at the guardrail, were united in our oohs and ahhs in confirming the momma bear and her cub ambling along the shore.

Yes, mountain goats are marvelous to see, but bears are the beast most feared… and sought. Over our three-day visit, every conversation included bear cautions, sightings, and close-encounters. Many visitors, certainly those embarking on longer hikes or deep-woods camping, carried bear spray, and a number of signs advised this. Dave and I did not, but we learned that if we did have some, we were not to spray at the bear, but in a swath between us and the animal. Good to know.

We also learned to make a lot of noise while walking, which we did, although we did not jingle like those who carried “bear bells” to add to their clamor. Later, Peggy, our Red Bus tour guide, told us, “Mmm.  Bear bells. More like dinner bells. The bears learn to associate that sound with humans and their food. Some say you can tell the scat of black bears because it’s small and full of berries, while grizzly scat is large, scented with bear spray, and full of bells!” 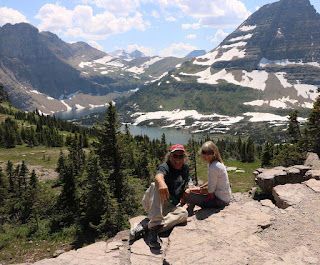 I can't wait for us to go, only a few more months now.
Thanks for sharing the journey.

Great post, Lea. I joined a hiking group through the Santa Rosa Junior College, mostly made up of people over 50, and the stories you hear as you hike, were wonderful. (And I pushed myself a LOT more strenuously than if I had been on my own, both in elevation and distance.) On one of the last hikes, where snakes were expected, I remember the leader saying, Think in terms of threes. The first person wakes the snake up, the second person pisses it off, and the third person gets the bite. Like a baseball lineup ;-)

Oh wow! Quite a snake tale, Gail! We had to skirt around a rattlesnake on a hike on Smith Rock in OR - we felt it totally added to our credit as hikers! XO

Glacier was my favorite national park on my western travels. I had an almost-close encounter with a mama and cubs while walking along a road by myself. Luckily a car coming from the opposite direction around a bend pulled up and told me they were just ahead of where I was going. I turned quickly and booked it the other way! Look forward to hearing more about your trip!

That's the thing....so push-pull! You WANT to see them, but don't at the same time. We had our safe from-a-distance and from-the-bus viewings, so that was perfect.

I just have to tell you again how much I adore your writing. You immediately take me along with you on your adventures and this one was great!!! Thanks Lea, my friend. So glad we hooked up in Weekapaug, many years ago now.

Great writing, Lea! I'm right there with you! Awe and wonder can turn into shear panic pretty quickly ... bet there was some solace in being part of a larger crew. (The photos are stunning as well!)

David, your friend, not husband, said it best! You take us all on the most glorious journeys.