With an elegant carriage that gleamed the deep red of a mountain berry trimmed in black, the Red Bus pulled in at the visitor’s center to take us up the Going-to-the-Sun-Road and beyond during the eight-hour “Crown of the Continent” tour.  Perfectly designed for maximum viewing with roll-back canvas tops, survivors of the park’s original fleet were newly refurbished pro bono by Ford. Our bus hit the road for the first time in 1936, and she was gorgeous. 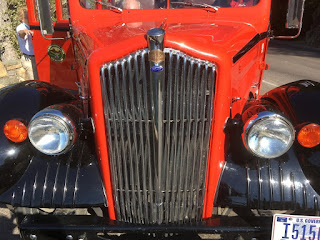 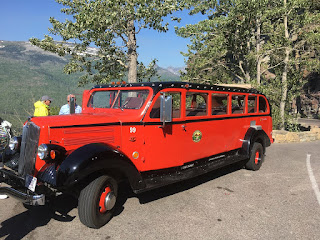 Dave and I checked in with Peggy, a park representative, who introduced us to our driver and guide, Peggy. When I slid into my seat, the woman next to me said hello and told me her name was Peggy.  Dave said it was lucky he’d not been born a girl because if he had been, his name would have been Peggy too. Yes, seriously.

Driver Peggy was freckled and blond, gregarious, energetic, informative, and funny.  Her admiration of the park’s natural features and the builders of the Going-to-the-Sun-Road was boundless. As she skillfully navigated twists and switchbacks, hugging the cliff sides to maintain a safe margin between us and the precipitous drops, she maintained a steady barrage of park facts and history. 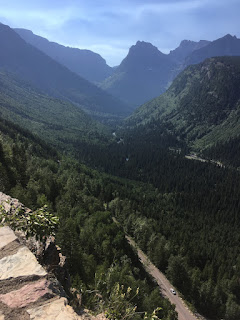 The road itself is a marvel. Bound by National Park Service construction standards to “protect the landscape above all else,” a team of “robust men” - World War I vets, Swedes, Austrians, Russians, engineers, and expert stonemasons – labored on the edge of 1,000-foot drop-offs for almost twenty years to carve a winding road that would harmonize with the setting.  “The country was wild, steep, and unforgiving,” the work, tortuous and dangerous, but for the 300 men who took it on, the pay  - $.50 to $1.15 per hour – was solid by 1920’s and 30’s standards. (1.)

At scenic overlooks, Peggy would pull the bus over and announce, “Yip!  Yip!  Prairie dogs up!” apparently hoping we’d join her exuberant chorus as we stood to poke heads, shoulders, and cameras through the open roof.  Stood we did, but yips, no.  And where other members of our group were initially reticent to Peggy's request for questions, Dave took every opportunity to make up for them, peppering our guide for dates, geology, botany, and wildlife information.

But as the hours stretched on, we coalesced as a group. At rest stops, invariably Peggy would torment the tardy by steering the bus toward the exit while punctual passengers obediently ensconced in their seats waved and grinned at those trotting to catch up. Ed, an artist, was the first to linger too long over his purchase of a Twix bar.  At the next comfort station, I was too leisurely in the rest room and was the one left briefly alone, sheepish, in the lot.  Ed and I bonded, two rebels, and each stop reaped new recruits to our giddy gang.

About halfway thorough the tour, we pulled into Many Glacier Hotel in the “Switzerland of North America,” the northeastern section of the park.  Built in 1914, the lodge sits on the shore of a remote lake ringed by mountain slopes that fold and bow like prayerful yogis at the waters’ edge. Peggy gave us an hour to explore and stretch our legs, so Dave wandered toward the stables while I climbed a rock-strewn rise above the lodge.

Clumps of tiny yellow flowers, potentilla, clung to the dry soil. Three straggly trees, long dead and beaten to driftwood gray, leaned into the buffeting winds.  Gusts whipped my hair and pummeled my skin, stirring the sun-silvered water below into white caps. It was glorious. The misty mountains and solitude. The wind, wild and alive as an ancient spirit.  I couldn’t help but thank God for the beauty of the planet and the blessing of my presence in this place. 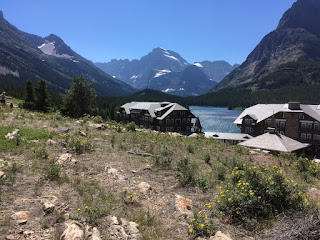 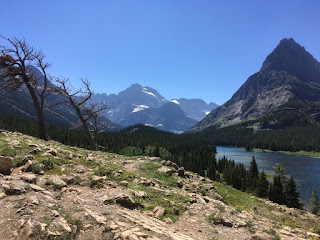 Once back on the road, the bus slowed in East Glacier as we cruised past meadows bright with purple lupines, Indian paintbrush, yellow potentilla, and… a bear! “Yip, yip, prairie dogs up!” Peggy crowed as she pulled to the roadside. A two-year-old grizzly stood among the wildflowers, not far off, quickly gathering a crowd as cars and buses parked to observe him.  Phones and cameras swung to focus as the oblivious young one nosed about in the flowers seeking a snack. 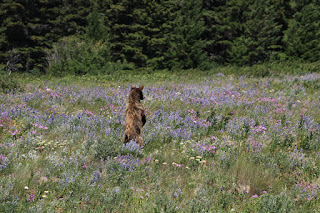 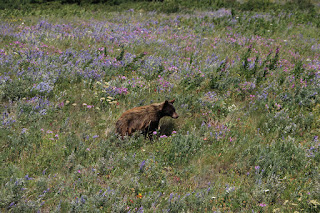 “Bear jams” such as this occur with every roadside bear spotting causing a potential hazard to the animal. In this case, it was amazing how rapidly two rangers arrived to shoo the bear away. Peggy told us that a female bear had recently been euthanized because she was too seriously injured to save when someone chased her over a cliff. After the sad, furious outburst that followed this news, we discussed the challenge that confronts all the parks: how to do the important work of nurturing a love for nature by encouraging visitors while protecting the park’s features, inhabitants, and the visitors themselves from human stupidity?

Yes, our species needs a serious whupping to restore some sense and foresight, but the park’s crusty monoliths, lofty peaks, jagged channels, and swooping slopes were a stunning reminder that ultimately tectonic plates and grinding glaciers will have their way.  Dangerous though we are, in the face of seismic upheavals, inland seas forming and disappearing, and mountains rising and falling, we are small.  Is it strange that I take comfort in this? 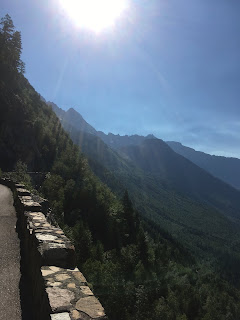 Loved that. Loved the bonding that occurred among the tourmates, as well as your chance to see that glorious well-named road. I remember driving that with Rob in 1978 on our first cross-country adventure.

I can't wait. Thanks to your posting, I am getting even more excited to be there.

“ Bear jams.....”. You never fail to delight with prose! A delicious reading-road trip! Thank you! Any chance of a get together?
Am proposing an idea for writers at a luncheon in July. Will you be around? Checking with pals for a date at the Artisan Southport.

Your on-the-road narratives let me travel vicariously! Love this one! Yes, humans should get a whuppin’ when they think their status in the grand scheme is superior to another’s.

Another great adventure for you and Dave, Sounds like Sean and I would love this bus excursion too!!! Your Weekapaug friend, David

Another great adventure for you and Dave, Sounds like Sean and I would love this bus excursion too!!! Your Weekapaug friend, David

You would, absolutely! My heart was full, smile plastered on my face, throughout that EIGHT HOUR TOUR! Couldn't help it. It was all so magnificent, such a boost! XXOO

What a wonderful trip! Have never been to that part of the world, but would love to see it. You're giving me ideas...

There is a safe & effective Natural Herbal Medicine. For Total Cure Call    +2348142454860,  or email him   drrealakhigbe@gmail.com       For an Appointment with (Dr.) AKHIGBE contact him. Treatment with Natural Herbal Cure. For: Painful or Irregular Menstruation. HIV/Aids. Diabetics. Vaginal Infections. Vaginal Discharge. Itching Of the Private Part. Breast Infection. Discharge from Breast. Breast Pain & Itching. Lower Abdominal Pain. No Periods or Periods Suddenly Stop. Women Sexual Problems. Chronic Disease. Pain during Sex inside the Pelvis. Pain during Urination. Pelvic Inflammatory Disease, (PID). Dripping Of Sperm from the Vagina As Well As for Low sperm count. Parkinson disease. Lupus.  Cancer.  Tuberculosis.  Zero sperm count.  Asthma.  Quick Ejaculation. Premature Ejaculation. Herpes. Joint Pain. Stroke. Weak Erection. Discharge from Penis. Hepatitis A and B. STD. Staphylococcus + Gonorrhea + Syphilis. Heart Disease.  Pile-Hemorrhoid. Waist & Back Pain.  Male Infertility and Female Infertility. Etc. Take Action Now. contact him & Order for your Natural Herbal Medicine:  +2348142454860  and email him    drrealakhigbe@gmail.com    Note For an Appointment with (Dr.) AKHIGBE.I suffered in Cancer for a year and three months dieing in pain and full of heart break. One day I was searching through the internet and I came across a testimony herpes cure by doctor Akhigbe. So I contact him to try my luck, we talk and he send me the medicine through courier service and with instructions on how to be drinking it.To my greatest surprise drinking the herbal medicine within three weeks I got the changes and I was cure totally. I don't really know how it happen but there is power in Dr Akhigbe herbal medicine. He is a good herbalist doctor.