When I was born, my parents were living in Edie’s family’s garage apartment, so Edie and I go back as far as friends can go.  We attended each other’s first birthday party. We suffered the wrongs of an evil science teacher who accused us of cheating (which we had not).  We both adored Ms. Josten, our beautiful 8thgrade Latin teacher. We danced, over and over, to Steppenwolf’s “Magic Carpet Ride” in our living room at 638.  We drove stealthily past Cliff Pemberton’s house when, at sixteen, I longed for him. We made mashed potatoes for midnight snacks and begged Edie’s mother to make her famous chocolate sauce. And fifty years later, when my Mom received her diagnosis, it was natural to call Edie and weep while curled on the green-carpeted stairs of 638 where, as teens, we’d spent countless hours gossiping about boys.

Before Mom got sick, Edie and her husband, Dave #2, invited us to their time-share in Bend, Oregon, and that is what prompted our entire trip west.

Edie and Dave #2 are seasoned travelers and hikers, and after my Dave and I experienced Glacier’s High-Line trail – during which we inched along a foot-wide pebbly path while clinging to a cable bolted in the rock face so as not to be swept to our deaths by buffeting winds – we thought we were reasonably ready to keep up with them.

On our first evening in Bend, they eased us in with a lovely canyon walk.  The next morning, we were up at 7:00 AM, slathered with sunscreen, fortified with granola and yogurt, and out the door by 8:00 in order to stay ahead of the scorching sun during our hike up Smith Rock.

Edie and Dave #2 were compassionate to us Smith Rock neophytes.  Yes, they’d chosen the Misery Ridge Trail, clearly designated “Most Difficult,” for our second day, but as I said, my husband and I were secretly preening with unearned cockiness after conquering at least a mile of Glacier’s High Line, and, adrenaline-charged, we were game. Besides, Earth herself beckoned to us, her bones exposed, ragged, red and raw, towering above and before us. Onward campers! 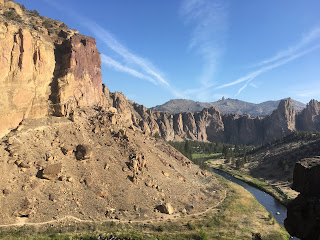 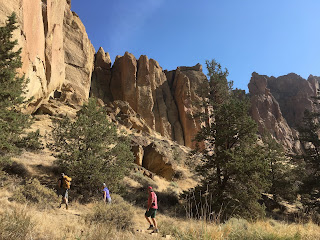 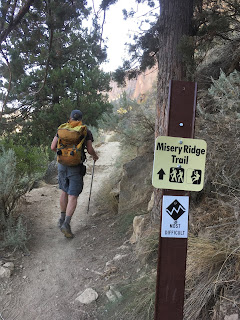 Our Bend Camp counselors were mindful of hydration and stamina, and insisted upon regular shade and water breaks, and, omigod, Chocolate Mint Cliff bars.  Can I tell you how good those things are? Anyway, we didn’t realize how significantly Edie and Dave #2 had slowed their pace for us, and Dave and I thought we were hoofing along just fine; we were solid.  The breath-stealing sight of rock climbers suspended from cables slung from one precipice to another gave us yet another excuse to take a good long pause for pictures and exclamations. 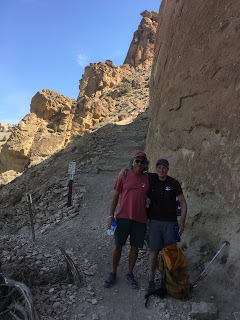 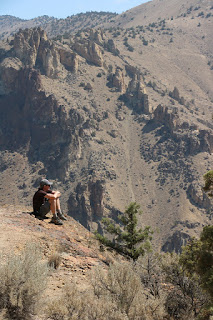 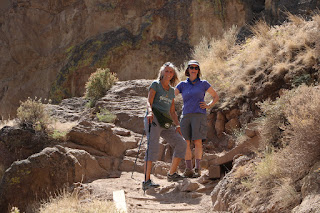 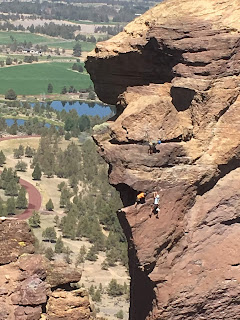 Ultimately, the sun caught up with us, and our final descent down a series of switchbacks was sweltering as well as challenging, but Dave and I were proud and exhilarated that we’d hiked this “most difficult” trail.  Were we undone by the rattlesnake curled in the rocks to the right on the teeny trail? No! We inched by and took pictures. 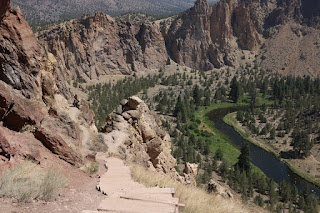 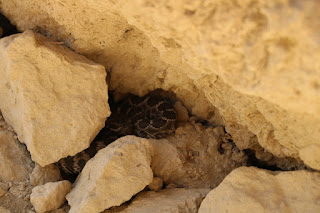 When we reached the end of the trail, mentally, I danced a victory lap that, at 65, I had successfully, fairly comfortably, achieved such a feat. But, I had not remembered, had not considered, the climb back up to the parking lot.  When I gazed up toward the lot - so faraway it seemed! - my body began to protest.

You know that let-down response when you really have to go to the bathroom and you pull into a rest stop and your body thinks, “Yay!  Now I can go”? And then, the bathrooms are closed for renovations and you are really screwed because your body thinks it has permission to release?  Yeah.  It was like that.

Agh, I was so close, but my knees said, “no way,” so I sat in the meager shade of a stunted pine while my heart cursed me with a frenzied, erratic, reproving beat.  Wait. Wait. Slow it down. Slow it down. I reflected on an incident at Logan’s Pass, when Dave and I witnessed a rescue helicopter landing to pick up a hiker who’d had a heart attack. Oh Lord. I’d not been charitable in thinking the man had been unrealistic in gauging his abilities.  Breathe.  Breathe. Judge not, lest ye be next.

When my heart calmed, I stood up, and remarkably, that respite was enough. I crested the final leg to the parking lot where Dave #2, bless him, waited in the car with the air conditioner blasting.  Once seated and cool, my triumph and bravado returned.

In the morning, rested and well fed, again we were up and out by 8:30 to hike the volcanic cone of the Newbury Shield.  It was forbidding and charred, a vast expanse of spikes and crevices. Surprisingly, berry-studded bushes and yellow potentilla bloomed from cracks in the rock, and chipmunks and lizards scurried about the black surfaces.  How could that be?  Oh, this Earth! So beautiful, bountiful, resilient, and mischievous!  I’m thinking about having her tattooed somewhere on my body. 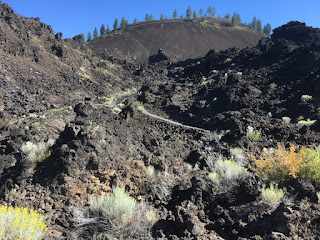 In our normal life, a moonscape stroll such as this would provide stories and adventure for months, but this was but one morning at Edie and Dave’s Bend Camp.  For, that afternoon, we were off to the Sun River Resort for a bike ride followed by tubing down the Deschute River.

After a tasty lunch on the balcony of a club overlooking a golf course, we changed into bathing suits, took a shuttle upriver, and slipped into the water, each cupped in our own royal blue inner tube, at the mercy of the river’s whims.

For three hours we drifted. Three hours to gaze at blue sky. Three hours to admire passing greenery and the occasional bird. Three hours to chat, when our tubes floated close enough, about the wonder of creation, man versus nature, evolution, and the danger of Trump’s roll backs in environmental and species protections.

Three hours where my control was limited to what paddling hands could accomplish in steering clear of debris or maneuvering toward a promising current. Despite what we like to believe about life, isn’t that really all we are ever able to do? 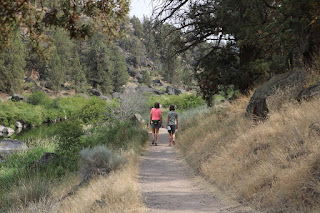 As always, your words paint exquisite pictures. My heart felt like it would beat its way out of my chest while reading about yours. It's a talent and a skill not every person can claim.

So impressed with your stamina! This brought back memories of hiking in New Mexico. What a sense of accomplishment at the end of a beautiful, if exhausting day. You two are reveling in retirement!

We are! It's a joy to say Yes! after being bound by a schedule. Also, my thanks to anonymous for your kind words. You lifted my heart!

Wow! Sounds like an amazing trip. Never been to that part of the country, but would love to go. Good for you on that incredible hike!

Wonderful, thank you, Lea. I love thinking of you and Edie hiking in that beautiful part of the world (not sure that I could keep up with you two).