To either side, amber slopes swept down to the road from ridges topped by miles of swirling windmills, then pulled away like curtains from center stage as we drove on. We left reddish earth and the dramatic beauty of the Columbia River Gorge behind as the land flattened, giving way to vast yellow fields of grain.  Vultures soared overhead, and once I spotted two lugubrious fellows hunching on the branch of a withered tree, their great black wings folded about them like some Victorian mortician’s overcoat.

What a difference from our usual travel route along the Merritt and I-95! To an annoying degree, I tell my children to drive as if every other driver is an idiot, because many of them are. The texters, speeders, lane-weavers and drifters: every one of them a danger to my loved ones.

“How carefully are you going to drive?” I caution them at every departure.

“Very carefully,” they respond wearily, too familiar with my question. 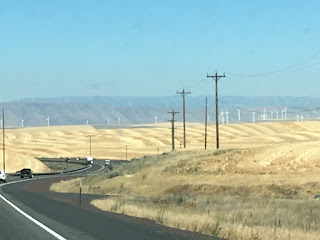 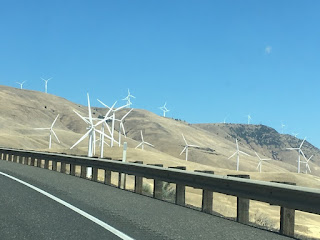 As we neared Seattle, traffic thickened. My cunning husband aimed for the HOV lane and we sailed past the multitudes of single-driver cars. I blessed him for his wisdom, little knowing how critical that choice would turn out to be.

Once we entered the city, I tapped on WAZE and typed the address for our Budget Rent-a-Car drop-off location.  Dave was relaxed now that the long drive was nearing an end, but I grew tight-lipped and anxious as we scanned the crowded, unfamiliar streets, searching for a Budget sign.

“There!” Dave cried as we glided past the door.  Stopping was impossible, so we circled the block. At least we had a sense of our destination.

As he slowed to pull over on our subsequent pass, Dave said, “You go in with the paperwork and find out what we should do. I’ll wait with the car.”

Good plan.  I climbed out, crossed the sidewalk, and pushed the storefront door. It didn’t move. In panic, I checked the hours posted.  It was 5:45, and Budget closed at 6:00. Omigod. Thank heavens we hadn’t known our time was that tight; I would’ve been a wreck in that traffic.

Only fifteen minutes to closing. I pulled at the door, as clearly indicated on the bar-handle, and it opened easily. I darted inside and down a flight of steps.

From behind the desk, a bespectacled Asian man greeted me pleasantly in heavily accented English and fired off an elaborate series of instructions. “Go out. First right. Into lot. Second level. Find empty slot. Check number. Bring back card and key.”

“Okay.  Okay,” I said, and repeated his instructions.

Hurry! Hurry! I trotted up the stairs, out the door, hopped into the car, and barked out commands. Dave swung around the corner… and overshot the parking lot entrance.  Too easy to do! Where was the sign? Barely visible. And the entrance, so narrow; thank god Dave was driving.

Back the car up, take the right, follow the ramp down. Down?  Yes, down! What? The guy said second level! I know, but look! The second level is below ground. Agh.

Dave parked the car and we unloaded our bags. Okay!  Let’s go! But my husband was rummaging around the seats. He stood up and frantically patted his pockets. His face was set as he bent back into the car.

“Where are the damn keys?”

“The keys?! We’re here, so they have to be someplace!” How often have I unhelpfully said that as Dave and I have enacted this same scene in so many places? But, these were those tricky keys that only have to be in the car to start it. So both of us were back in the car, on our knees on the seats, fingers straining down the sides of the cup holder, hands wildly brushing across leather, then opening the glove compartment two, three, and four times. What was the hour?  Surely 6:00 had come and cruelly fled!

“Here! Found them!” I waved my trophy triumphantly.  We locked the car and dashed for the elevator.  It released us into a lobby abounding with unmarked doors … and Budget was not listed on the directory.

“Look!  I saw that truck when I was waiting for you!”  Dave pointed through a window, and we sprinted outside. On the sidewalk, we looked left-right-left and there was Budget!

Princie has been like a big sister to me, minus the teasing that might naturally accompany that bond. Where I am prone to worry, agitation, and a tendency to run dark, she is calm, practical, soothing, and optimistic.  We both love antique homes and antiques, and in matters of conservation and activism, she has been my mentor since I met her in the early nineties. When her husband, Bob, spotted my folk art wall calendar, he shook his head.  “Really?  Princie has the same one. You too are so alike it’s spooky.”  (But for that worry vs. calm, dark vs. optimistic thing…)

When she mentioned four years ago that she and Bob planned to move west to be closer to their children, I fully understood. How could I not?  But selfishly, I was distressed.  Seeing my pained expression, she assured me, “Don’t worry.  You know how slow the real estate market is. It will take at least two years to sell our house.”

Not so.  A young couple toured their gardens and 1700’s house surrounded by acres of woods and, before a price had even been set, declared it a “forever home,” and claimed it as their own.  So Princie and Bob moved far more quickly than expected, and our trip west was a chance for us to glimpse their new life in Washington.

More than once, they’ve told us they don’t miss the east, and as we explored their house above a bay, the sun shining, gardens abloom with dahlias, phlox, roses, and hollyhocks, we understood why.  Dave whispered, “We’ve come west on an adventure, and they’re living their adventure.”

And they were eager to give us a taste of what that meant.  One morning, we scrabbled about a beach mounded marvelously and mysteriously with driftwood tree trunks, fodder for rafts, forts, floating, and photographs.  In the evening, we enjoyed a picnic and performance on the lawn at the Bloedel House and Reserve while Tybalt dueled Romeo, and Juliet swooned from her balcony before us. 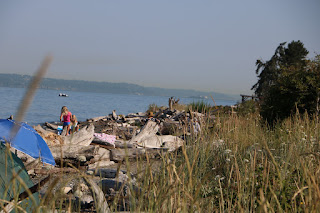 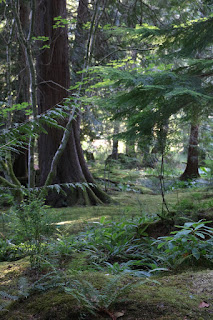 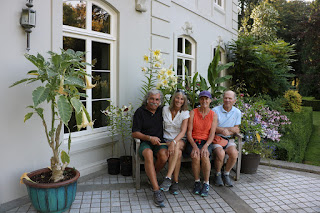 The next day, speaking in the hushed tones a mossy forest seemed to require, we walked the primeval Fairy Dell Trail, taking care not to disturb a garter snake sunning in the midst of the path. Before catching our ferry to Seattle, we browsed the farmers' market stalls of vibrant red cherries, ripe tomatoes, leafy multi-colored Swiss chard, crusty fresh breads, and … sculptural tractors assembled from vintage sewing machines. Hm. Yes. 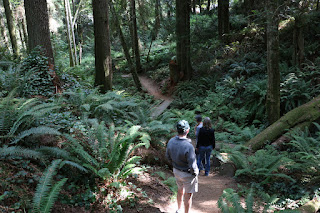 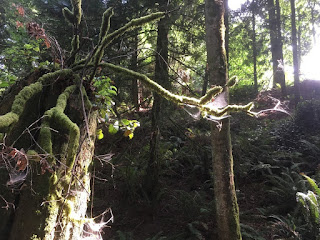 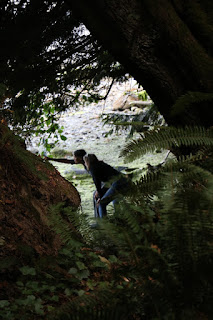 We ran into two of Princie and Bob’s new friends who directed us to check out the Chihuly Museum while in Seattle. They were confident we’d heard of the artist, and while avoiding eye contact and studying the handmade soap display nearby, we murmured that the name sounded familiar. But the meeting was fortuitous and after we lingered over farewells and hugs good-bye, Dave and I boarded the ferry, disembarked in Seattle, and sought to rectify our ignorance with a visit to the Chihuly Museum. 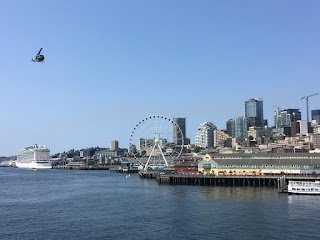 Dale Chihuly is a man enchanted by the tendrils, tentacles, pods, buds, and blossoms of this Earth and beyond. His brilliant spires of vibrant glass undulated from the foliage surrounding the museum and swirled from chandeliers suspended from the ceilings within. Crabs, turtles, octopi, and fish swam, iridescent, within ocean fantasies of swaying glass kelp while other creations seemed sinuous curiosities from a distant planet. 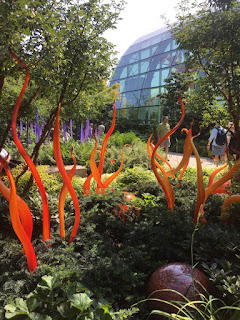 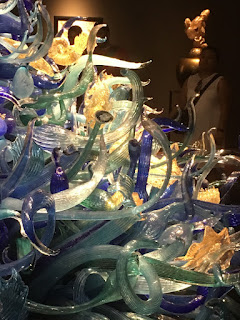 As exuberant artistically was Chihuly’s work, in the sliver of Seattle Dave and I visited, nothing prepared us for the magic of the International Fountain. It was a hot afternoon when our meanderings led us to a wide lawn.  In its center, an expansive piazza curved to encircle a silver half-sphere.  Water streamed down its sides as the opening strains of the “Ode to Joy” emanated from its core. Children of every age in bathing suits, summer garb, or underwear hovered expectantly.  As the music built, sprays of water shot rhythmically skyward in a powerful rush of mist and crystal drops, rising and falling in time to the resounding tympani and brass.

Oh, the euphoria for observers and splashers as little kids wiggled their butts with glee and danced with arms flailing!  As grown-ups, granted childhood again, swirled with faces upturned to the heavens and spun in the cooling waters.  The shrieks and laughter competed with the music’s swells… and sent my spirits soaring. 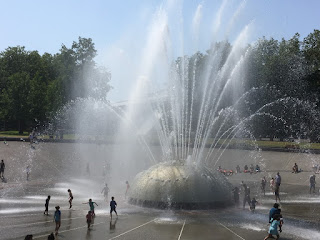 Love hearing about your wonderful adventures, Lea. I also have a "keys losing" husband and am always having to scan the vicinity to find them (usually one foot away from his nose). That forest was so beautiful. Always a pleasure to read your writing.

Isn't Chihuly wonderful? I saw his exhibit at the NY Botanical Gardens a couple of years ago. It was magical.