The soft glow of candlelight.  Well-worn plank floors.  Low, beamed ceilings tinged by centuries of smoky fires. A blaze leaping, orange and hot, beneath an ancient mantle.  The clatter of glassware and pewter, a murmur of conversation. With ease, I mentally garbed our server in Colonial mop cap and apron while I settled into a seat across from Dave in the 1700’s tavern with a sense of cozy familiarity.

Dave has hazy memories of robes sweeping sandy soil, and his feet, sandal-clad, during a former life in Medieval times. My comfort in Revolutionary settings is so total I feel I must have worn that skin before.  A guide to castles and dungeons of the Middle Ages might have been a fitting Christmas gift for Dave, but I’d chosen “Taverns of the American Revolution” by Adrian Covert instead.

Over the following months, Dave and I have snuggled up with Mr. Covert, charting future jaunts to battle sites, historic homes, and taverns. The Griswold Inn in Essex, featured in Covert’s book, is only an hour from our home, and has become one of our favorite destinations. 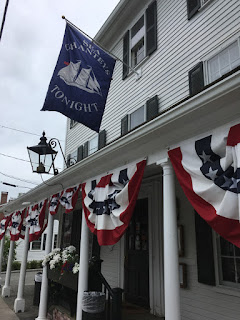 Open for business since 1776, The Griswold Inn (fondly known as “The Gris” to locals) survived a sneak British attack during the war of 1812 that left 27 ships aflame, decimating the town’s shipbuilding industry.  The inn is gracious, beautiful, and comfortable, and beyond its history, boasts several unique features.

One of the inn’s dining rooms is made of wood salvaged from an old covered bridge, and the Taproom is a repurposed 1738 schoolhouse.  Among the antique firearms displayed in one dining area is a musket, and with it, an aged handwritten note dated July 7, 1776, that was discovered in its barrel:

“My dear son Jared,
I send you this my gun,
Do not handle it in fun,
But with it make ye British run,
Join ye ranks of Washington,
And when our independence is won,
We will take a drink of good old rum.

In a way, my own past seems almost fiction, as hazy and unreal as Dave’s stroll through dusty medieval streets in the thirteenth century, so grasping history as the lives of real people is a stretch for me.  But as I read Jared’s father’s note, I could picture him putting quill pen to paper, squinting in the dim light of a candle at a scarred wooden tavern table. Most likely, he quaffed some ale or rum as he urged his son to join the cause of independence two days after the Declaration was approved. I hope Jared survived the war and lived to share that celebratory toast with his dad.

On this evening at The Gris in 2019, without threat of British interruption, Dave and I sipped red wine and beamed at each other as our server set down platters of salmon with creamy leek, mustard, and wine sauce, and trout over beans with roasted tomatoes.  Heaven.

Meanwhile, we could see from our fireside table that the adjacent Taproom was filling in.  The crowd was a mix of ages and predominantly male.  Regulars, I guessed, by the grins, greetings, and glasses raised high.  The Gris boasts live music every day of the week, year round, and while we couldn’t make out the words, it was clear from all the “fare thee well, me lads” and talk of tossing seas that we’d happened upon chantey night with The Jovial Crew.

Dave and I finished dinner as robust bass voices rolled and rumbled in unison, swelling in waves to carry us toward the Taproom as sure as fair winds bear sailors back to their families.

As we inched between the companionable patrons, a muscled, portly, skinny, clean-shaven, tattooed, and flannel-shirted lot, I noticed all of them were singing. All of them!  No one checked cell phones, and no TV distracted with the shriek of a referee’s whistle or the squeak of sneakers on polished wood. Every face was turned toward the five musicians up front, and every person knew the lyrics.  Each song was hallooed as an old favorite as guitar, fife, vocals, and concertina* spun tales of homesickness, travel, good rum, and women. The Old Ohio, Running down to Cuba, Fishin’ for a Whale, and The Girls of Old Maui begged that we bemoan and bellow, and the singers supplied the chorus in a call-and-response so newcomers like us could not plead ignorance and stay silent. 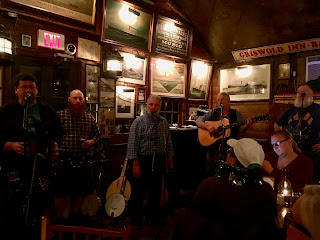 Eventually, I managed to snag a seat near the door, and saw that new arrivals edging into the bar picked up whatever song was underway, joining in as they shrugged off coats and raised a finger to order a beer.

During a break, the man in the seat across from me said he learned the chanteys when he was a Boy Scout. “The scoutmaster used to come here on Mondays and then teach us scouts the songs around the campfire.”  He gestured toward the lead vocalist, a sturdy guy with a close-shaven beard and white hair.  “Cliff has been singing chanteys at The Gris on Monday nights for 47 years.” Soon thereafter, Cliff, having spotted us, the only strangers in the crowd, sidled over to introduce himself.  “So, first time here!  Where you folks from?”

Much as it’s always been in convivial taverns – even when revolutions were being planned, tea parties hatched, and drafts of broadsides and pamphlets scribbled – conversation flowed freely between sets.  Members of The Jovial Crew and those around us made sure we didn’t feel like outsiders. Tim, the tall, white-bearded vocalist for the band, told us,  “These are work songs. I can hear chanteys sung in foreign languages and know the job being done by the nature of the rhythm. Think about it.  Most of those sailors were 14 to 17.  Boys. They missed their moms and girlfriends.  They were homesick and horny!  The chanteys tapped into that to perform the work of keeping them synchronized while hauling up sails or anchor.”

Indeed, the songs chosen for the third set were clearly created to keep those lusty boys focused. The lyrics were joyously raunchy and the crowd belted them out with grins and gusto.  A slew of verses I’d never heard in that innocent old ditty She’ll be Coming Around the Mountain would certainly fuel a young lad’s fantasies while he swabbed decks and hauled ropes. “You had to hold those boys’ attention!” said Tim.  “That’s what interested them!”

It seemed we could all sing together forever, but ways must surely part.  Lynn Anne, the server, bustled about, smiling and singing along, but probably ready to call it a night. Chairs scratched across the floor. Empty glasses were set on the bar and tables. But instead of leaving, people circled the room and linked arms. Obviously, it was the thing to do, so Dave and I rose, a bit befuddled, and searched for a spot.  There was a gap near the door so we angled that way.  A hubbub of protest from around the room rang out, “Wait!  No! You can’t leave now!”

Oh!  How lovely to be so welcomed! “We’re just trying to find a place in the circle,” we stammered.  Room was made for us, and we squeezed in.  Swaying together, we all bid farewell, strangers no more, singing, “Rolling home to old New England. Rolling home across the sea.”

*concertina: small bellow-like instrument with buttons for keys and handles on each of the two hexagonal ends.

What a wonderful time and makes me want to go there! Like you, I've always been fascinated by this state's history of the Revolutionary war. So fascinating. I've never been to the Griswold Inn, but have always wanted to go. Maybe I'll make a reservation.

Absolutely! You'll love it! We've been back several times now, always shooting for chantey night, and it's always a joy to be there. Plus, the town of Essex is lovely, right on the river.