A Vision from Pain, Rocks, and Refuse

Toni is blond, animated, and about my age. Her hair is caught up in a ponytail under a baseball cap. Despite the gift of this mild day among a string of those gray and chilly, she’s wearing a fuzzy black vest over an orange turtleneck and jeans.  Dave and I are standing with her in the gravel driveway that circles before her home. As our tour begins, she gestures behind her and says, “Pete brought me up to this rock and said, ‘I’m going to build a castle here, and I want you in it. Will you marry me?”

Our eyes travel the rough stone face of the castle before us with its turrets, balcony, and arches; its walkways, crenellations, and green copper pinnacles.  Toni grins at our awed expressions and says, “Of course, I said ‘yes.’” 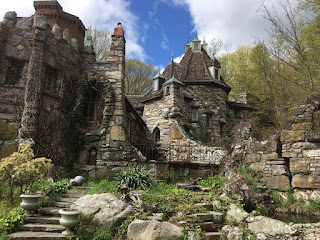 Ten days ago, Dave and I were sofa-snug, watching “American Pickers” on TV.  Frank and Mike, the Pickers, rove the country seeking their idea of treasures in attics, dilapidated barns, corroded trailers, and obsolete warehouses.  Their primary interest is vehicles of every kind, and Mike goes into paroxysms over rusty handlebars and seemingly worthless headlights if he knows they’re rare and he has the right collector or a bike they would fit.  Even watching from our sofa, Dave and I share the Pickers’ thrill when the beam of their flashlight passes unexpectedly over the chrome grill of a vintage Rolls Royce or catches the snarl of a carousel lion stored in a tumble-down shed.

On this particular TV night, Mike and Frank steered their white van into a curving, wooded driveway. As they rounded the bend and broke through the tree cover, they gasped.  “Omigod!  It’s a castle!”

From the couch, Dave and I echoed, “Omigod!  It’s a castle!  Where is it? Back up the tape!  There was a sign at the foot of the driveway!”

“Wing’s Castle,” said the sign, and as Mike and Frank explored the property and
out-buildings with Toni Wing, I tapped in a search on Google to find out where it was. “It’s a Bed & Breakfast in Millbrook, New York.  An hour and a half away!  We can GO there!”

Just over a week later, Dave and I stand in Mike and Frank’s footsteps chatting with Toni.  How I love the openness of retirement!  The ability to say “yes!  Let’s go!” And do it!

“80% of the materials are recycled,” explains our host as we pass the moat that winds from our cottage, the Annex, and under an overhead walkway to the main castle. “Pete grew up on the dairy farm down the hill and knew all the farmers in the area. He’d make the rounds buying decrepit barns in order to use the beams and planking.” Periodically she points out farm implements and tools incorporated into railings and rooflines. We peer more closely and spot iron cogs, wrenches, and augurs used to purposeful and decorative effect. “Often the farmers would say, ‘If you’re taking the barn, take all the crap inside too. What am I gonna to do with it?’” 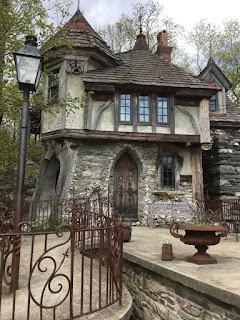 “Back in the seventies, you were allowed to poke around at the dump, and we acquired all kinds of broken materials – tiles, glass, wrought iron. Pete figured out uses for all of it. He wasn’t an architect.  He’d never done tile work or built an arch. He was a farm boy… and he just learned how to do what he needed.”

Pete is everywhere and nowhere.  We’d learned from American Pickers that he died in an accident four years ago, but as we tour his castle and marvel at his vision, humor, and craft, he is walking with us, and I surprise myself in tearing up, grieving at the loss of this man I’ve never met.  I miss him.

From the top of the turret, we gaze out at waves of low rolling hills and distant mountains beyond the winery that was once the Wing family’s dairy farm. Toni leads us down a twisting, narrow stairway, and once outside, draws our attention to a sinuous dragon with glossy tile scales snaking along a half wall. Nearby, a former water tower dome serves as the roof to the meditative Buddha room.  Out front, massive stones rise from the Earth, Stonehenge, overlooking the vineyard.  Familiar items, cast-offs reclaimed and re-imagined, are transformed into gargoyles, weathervanes, heraldic shields, and yes, dragons and Buddhas. 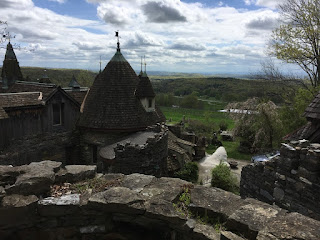 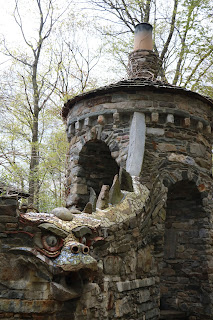 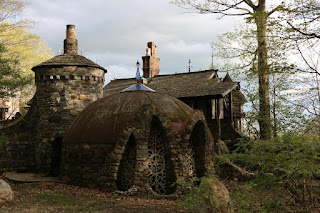 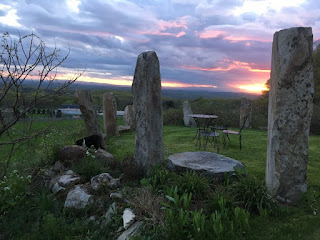 In the living room of the main house, too, what appears to be the prow of a ship is actually a railing from a Victorian porch.  Colorful carousel horses gallop from wires suspended from the ceiling. “We’d get them at flea markets and tag sales for $25.  No one wanted them.”  In fact, it was a carousel creature that captivated Mike and Frank during their visit. 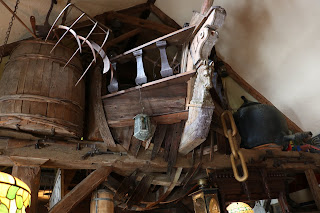 Toni leads us down another stone stairway to an underground passage that connects the Annex, where we are staying, to the Dungeon.  I stop and angle my head to better see the floor tiling.  “RIP PETE WING” is set in jagged white letters against a dark background. The letters seem to emanate light in the dim passage. “Pete had completed the exterior of this section,” Toni says.  “He was going to walk through that door to start on the interior the next day.”

But he died in a car accident.  His son, Charles, is continuing the work, tuned into Pete’s medieval vision as surely as if his father were handing him pieces of tile and directing his next move.  My heart aches for Charles, as I picture him kneeling here, imbedding this tribute to his father. 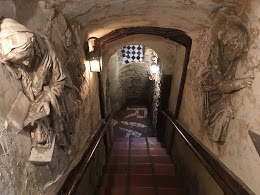 After browsing the so-called collectibles and mid-century relics in the Millbrook antiques mall, Dave selects a primitive wooden mallet, and I find a weighty black mortar and pestle. It would look great on the mantle at home and I hope it dates from the nineteenth century as the label states.  The vendor is chatty and friendly when we approach the desk to settle up. “So, where are you staying?” he asks.

To our response, he says, “Mmm. The owner died in a car accident a few years ago.” We tell him we’d heard, but he has a story to tell and continues. “He was driving a rare three-wheeled car to the vintage car show in Rhinebeck. Lost control of the car. Maybe hit a pothole or something? The last words he spoke to the EMS guys were, “Don’t tell my wife…’”

My eyes fill at those words, and as we head to the next shop, I reflect on Pete’s message. Beyond the obvious, what did it mean? Had Toni asked him not to go?

When we return to the castle, we Google Pete’s obituary.  He’d been driving a 1936 Morgan Supersport.  The article said speed was not a factor in the accident… perhaps a malfunction of the rear tire.  The Morgan does not have a seat belt, and Pete was ejected.

We continue to discover that Pete is a legend in Millbrook. At Nooch’s for dinner, we sit at the bar and order bourbon-glazed salmon, broccoli and mashed potatoes. Jim, the bartender, is about fifty, attractive, tall, and graying.  “Where you folks staying?” he asks after establishing we’re not locals. We tell him, and his eyes widen. He says, “I saw the castle in its earliest stages. I was about four. I took my kids over to visit when they were little and they loved it. That man, Pete, was crazy talented.  He could do anything.”

Our dinners are served, and Jim waits on other patrons. A balding man sets up an electronic trivia game in the corner.  Jim comes by to check on us and, without prompting, remarks, “I’ll tell you, Viet Nam was not kind to him. Pete came back from the war and disappeared into his basement for about six months. He dealt with it eventually. He carved life-sized statues for a number of stores in town. Not sure where they are now. Maybe you can find some old pictures?”

Morning sunlight slants through a slice of window as Dave sits reading in an antique straight-backed chair.  Beside him, the front door is gothic in design, one of many doors salvaged by the Wings. “We had a whole shed full of doors!”  Toni has told us, and each one is unique.  Even our bathroom door is beautiful, made of deep red cherry wood carved in gentle folds to emulate curtains. 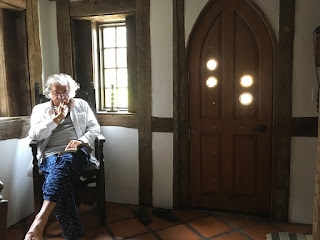 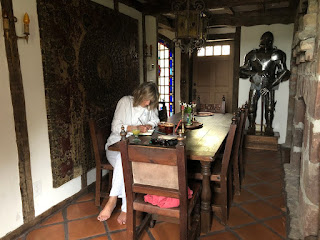 I’m writing at the long dining room table before a brick fireplace. A full suit of armor stands guard at his station by the door to our tiny Tuscan-style kitchen. Pete imagined everything that surrounds me.  With Toni’s constant help, that of their kids as they grew, and occasionally from friends, he conveyed the castle in his mind to paper, and then, to reality. Toni labored and lived the castle’s creation too, hauling barn beams, hefting rocks, and clambering over refuse in search of finds at the dump, yet Pete is always the one acclaimed. I wonder… has it been hard for Toni, to be cast so often as supporting player in Pete’s production?

And there were many acts to Pete’s story, eagerly offered at the mere mention of his castle. Enthralled as we were, we never sought information, but with each trip to town, we learned something new.  Pete built a haunted house that still opens every Halloween. During the summer, he ran a theater camp that specialized in Shakespeare. During our initial tour, Toni had directed our gaze to a window above a walkway that had featured in many performances.  She recalled a rehearsal, and a young thespian’s complaint that, as Juliet, she had to appear on a balcony.  “Pete said, ‘Don’t worry.  You’ll have your balcony in time for the show.’” 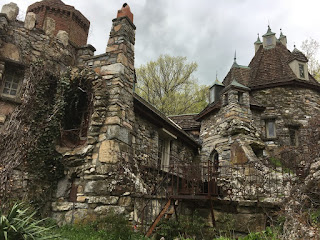 Very interesting, and I am so glad you and Dave do have the time to actually "DO it" when you get the urge! Wait, that didn't sound right ;-)

Wow! What an incredible story. So sad about Pete and how he never got to finish his amazing vision. That castle is amazing. Always admire you and Dave's sense of adventure and curiosity and companionship. What a wonderful marriage.