We are Women, We are… Witches?

With stick brooms, gauzy capes, and flowing black dresses, witches hunch by the fireplace, perch on the mantles, and glower from the kitchen counter. My sisters and I have always reveled in Halloween, and when the scent of the Earth supplants summer’s flowers, when daylight’s vibrant colors flame then give way to early darkness, we welcome the images of these mystical women into our homes. 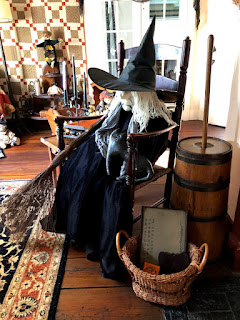 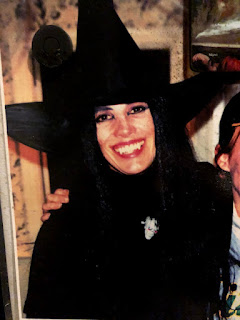 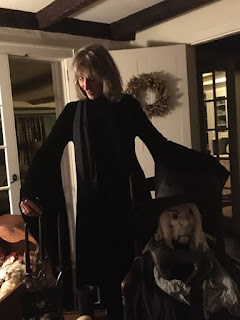 Every Halloween, when I don my grandmother’s black Victorian cape, a sweeping velvet dress, and yes, a peaked hat, I am a different person. When I am The Witch, I feel powerful. Still, when I stand in the circle of warmth at the edge of our town’s annual Halloween bonfire, entranced by the swirl of sparks and pulsing embers’ glow, I never escape a passing shudder in imagining being staked at its center.

It seemed to explain some sense of connection when my uncle’s research into our family’s genealogy uncovered a Salem witch.

When witch hysteria possessed the Massachusetts towns of Salem and Danvers, Zerubabel Endicott and Richard Carr recalled an “experience” of twenty years prior. The two men and Richard’s father, George, had ridden by the Thomas Bradbury property where, the men claimed, a blue boar ran from the house and attacked the senior Carr’s horse. In 1692, the men reported to the authorities that Mary Perkins Bradbury, my ancestor, had, through Satanic means, taken the form of that boar. Despite testimony on Mrs. Bradbury’s behalf from over 100 neighbors and townspeople, she was sentenced to be hanged.

From a modern perspective, such an accusation seems absurd, although one might see a parallel to current hatreds, fears, and scapegoats, where desperate people seeking asylum are branded “criminals and rapists” and imprisoned. That aside, Dave and I recently toured the Witch House in Salem, and an informative docent impressed on us the fever of terror that fueled the virulence that led to the hanging of nineteen women and the crushing of one man. 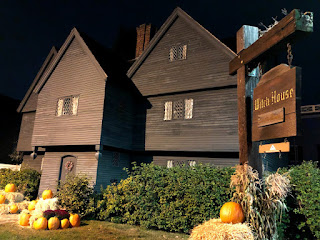 No witches, real or imagined, lived in the Witch House; rather, it was the home of an affluent magistrate and judge, Jonathan Corwin. When Judge Nathaniel Saltonstall resigned in protest over the hanging of Bridget Bishop, the first “witch” execution, Corwin was appointed in his place to the Court of Oyer and Terminer. While it’s impossible to know how Judge Corwin viewed the trials, our docent made clear that he, like the townspeople he served, lived with sorrow and fear, as well as the weight of his responsibility.

Crop failure, mortality, and disease were haunting enough, but the possibility of Indian attack was also a nightmarish specter. Only two years before his Salem appointment, Corwin was sent to Maine to evaluate Colonial security and found it sorely lacking. Response to his report lagged, and just weeks after his visit, the town of Casco was assaulted by Indians, many residents murdered, and the town reduced to cinders.

Surely Satan and his minions were directing such horrors, and everyone was suspect. Corwin’s mother-in-law had already been accused by a servant, and of the Judge’s ten children, only five had survived childhood; three of those yet living were young women. The heartache of such losses is paralyzing to fathom; the urgency of deflecting attention from oneself and one’s loved ones apparent. In a community crazed with terror, no one was safe.

In truth, those accused and convicted of witchcraft in 1692 were women guilty only of being wise, healers, strong, weak, ugly, or enviable.  In Mary Bradbury’s case, she had spurned the wrong man.  She was 77 at the time of her conviction, a pious woman, a pillar of the community, but in her youth, she refused George Carr’s offer of marriage and chose Thomas Bradbury instead.  That snub stung, and Carr's bitterness simmered for decades. Mary was fortunate that the Court of Oyer and Terminer was suspended before her sentence was carried out, and she was spared.

While the Salem hysteria was rooted in the ravings of impressionable teenagers, and the grudges and concerns of its time, the persecution of women in the Middle Ages spread from different seeds. In her article, “The Thirst for Spirituality and the Rise of Witches,” Julie Peters points to the rise of capitalism as its genesis. “Before the witch hunt era, women held jobs of all kinds. They were bakers, alemakers, smiths, doctors, and even surgeons. The capitalist structure required that these women give up their lives to the service of creating children, the future labor force.” In particular, healers with skills in contraception and abortion were targeted, as they offered women the means to “bodily autonomy and the right to keep their jobs.”

Too familiar. Centuries later, rebellious women have abandoned black peaked hats for pink ones and Senate seats.  As they fight for bodily autonomy and equal treatment in their jobs, they gather and resist, acknowledging continuity with the struggle and injustice faced by those who came before them.  As one sign at the Women's March read, “We are the granddaughters of the witches you weren’t able to burn.” 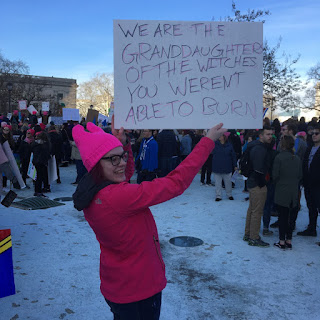 From the exhibit at the Witch House: 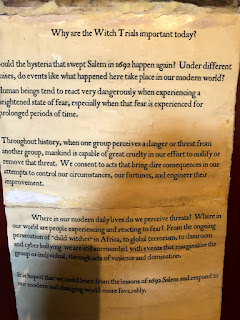 This is so good, momma. You are a beautiful wordsmith.

Lea, You make a gorgeous witch! I shudder when I think of those poor women in Salem and what they went through. My mom and I went to Salem a few summers ago and stayed in an old house from the 1800's (an annex of one of the inns that was full). I had the strangest, scariest dream there and couldn't wait to get out of that place! I wrote about it...

Wow Laurie!!! It's not surprising that everywhere in the town has a vibe. I will read your piece right now!

Casey said it best: You are a beautiful wordsmith.