Every few weeks, Dave gets out an enormous antique white porcelain bowl. He scoops in grits, corn meal, oatmeal, and teff, then pours in boiling potato water.  He doesn’t measure anything. He lets this brown watery soup sit for a while, then adds warmed honey, heated beer, milk, yeast, and a mix of flours. Finally he blends them, stirring laboriously with a large wooden spoon. The batter is then left to rise, occasionally puffing over the sides of the bowl onto the counter. 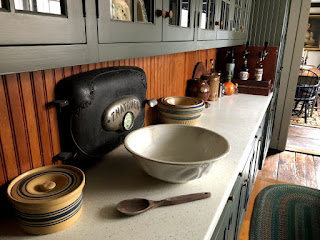 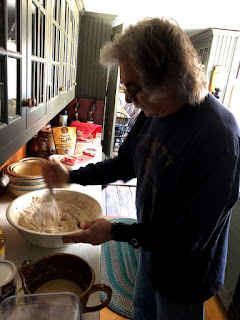 Dave has always enjoyed making bread, but it became a loving, healing compulsion when I started chemo ten years ago.

On matters of diet, my oncologist was firm: no whites. No white flour, no white rice, no white sugar, no white potatoes. I live on bread and pasta, and mashed potatoes are my absolute favorite, so this was grim news. Chemo steals appetite and perverts taste, so finding foods I could eat, much less enjoy, was going to be a challenge. Dave, my dearest Dave, pursued that challenge at every meal.

I loved the English muffin bread Dave baked periodically, but white flour was the primary ingredient, so he upended the recipe, substituting oatmeal, quinoa, amaranth, and rye flours for that forbidden white.  The combinations varied with every baking, as did the addition of corn meal, beer, honey or molasses. Always, the kitchen filled with an aroma that conveyed health, caring, and coziness. The result was darker than the original, made to be toasted, tasty on its own, and delicious with butter, jam, or honey.  (I know, you’re reading this and dying for a slice right now.)

Ever since, we’ve begun each day with coffee and two slices of toast. Also since then, friends have gotten frightening diagnoses or lost loved ones.  What does one do in the face of illness, fear, and sorrow?

Dave bakes, and gives bread. As a result, his batches have increased, as has the frequency of baking. He loves the robust mixing and miraculous rise, and we both love the comfort of an oven radiating warmth and heavenly smells, as well as the thought of the pleasure those loaves might bring.

Love is always life’s most necessary ingredient, now more than ever it seems. A piece or two of Dave’s hot, buttered toast is like adding a heart and body-sustaining hug. 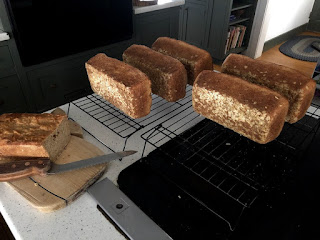 Oh my God. What a beautiful post. Your Dave is a treasure and probably helped you get better with his wonderful bread. I'm trying to cut my own white flour habit and its hard. Now I always choose the healthiest bread I can find. There' still cookies and chocolate, though. Sigh.

Dave’s bread has always been nourishment for body and spirit. I could smell it baking as I read your account of his loving process. I had no idea he made his scrumptious creations without a recipe! That’s incredible! Healthy and heartwarming. XO Joanie

You're right; I'm craving that bread! I'm learning to make vegetarian/vegan foods for my healthy daughter; a fun and sometimes yummy challenge (except when it's not yummy; like the quinoa cookies I improvised last week; I'm sure the local birds loved them).

I keep yearning to find a chocolate chip cookie recipe that is oh so healthy and yet yummy. Lots of oatmeal helps, but still need all the brown sugar.