It’s February, and we just took down our Christmas tree. I’d begun to feel sheepish about it’s lengthy tenure, but every evening, when early night shuttered the world beyond our windows, we’d turn on the tree lights, and their glow banished the season’s bleak darkness.

“We should take it down,” I started saying in mid-January.

“Not yet,” Dave would say as he looked gratefully toward the tree beaming in the corner. “I’m not ready.”

I wasn’t either, but somehow it felt slovenly to hold onto Christmas for so long.

We were late, for us, in getting it up in the first place.  A storm had encased twigs and branches in ice and we’d hoped for a thaw before heading to Maple Row Farm to choose and cut a tree.  This was the one week of winter that held the cold, however, so our boots crunched over frozen grasses, and light glanced off brittle ice trees by the time we walked into the farm fields. 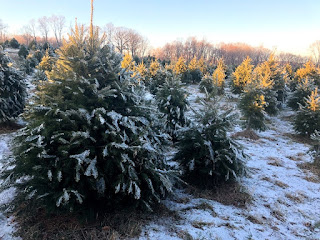 We thought the cold would limit our usual meandering hunt, that we’d be willing to settle for the gaps between branches or lack of aroma that usually eliminate contenders. But no. We trudged up the hills, to the edges of the rows, stopping to mull over each other’s finds, diplomatically taking a pass, and continuing on.

Finally, the tree was selected and lugged, heavy with the weight of its icy coat, to the side of the trail for pick-up by a tractor.  When eventually we loaded it onto our car, the farm hand who helped us said, “be sure it thaws before you bring it into the house, otherwise the warm air will shock it and it’ll drop its needles.”

A fortuitous caution: we hadn’t thought of that.  This meant an added delay in putting it up, so we were entitled to enjoy it for all those extra weeks. Plus, our 14-months-old granddaughter, Eleanor, loved it. Whenever she came to visit, she immediately looked to the corner, pointed at the tree, and if the lights weren’t on, pointed at the switch. Then we would stand, the baby in my arms or Dave’s, our faces bright against the green pine, as she reached for her favorite ornaments.

I’d unhook each one from its branch, and Eleanor would stroke the fur of the tiny fuzzy fox, marvel at the sparkles on the delicate glass balls, and clamor to hold felt angels and Santas. She never seemed to develop the affection that Dave and I have for the cardboard toilet-paper-roll angel that Tucker made in 1985 that graces the treetop every year, but she was fascinated, of course, by the fragile glass icicles and longed to clutch them. 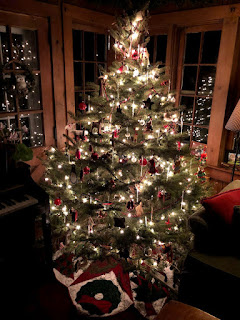 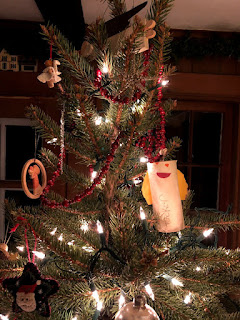 I wonder what she’ll think when she arrives on Saturday and the tree, by now a familiar fixture, is gone.

Last week, our daughter-in-law, Lisa, called from Boston with little Paul and Lexi to FaceTime. We showed the kids the tree, and I said, “You know, it’s not really a Christmas tree anymore; it’s a Winter Tree.” Paul remembers everything, and I know the name will resurface when next year’s tree stands firm in that corner in February.

The tree stopped taking water about two weeks ago.  We’d add a little periodically, just in case it was thirsty, but we’ve made the mistake in the past of keeping the tray filled and dealing with a mess when the time came to cart the tree out. This year, the mess wasn’t about water, but pine needles. For the past few days, without any hint of air currents or someone brushing by, the tree would release a shower of needles, their descent an audible pffffttttt as they flowed through their brethren to the quilt encircling the base. This morning, a number of branches were totally bare, and the needles on the floor were inches deep. I could have started a business making those little pine souvenir pillows they sell in Vermont gift stores.

As Dave and I gingerly plucked off ornaments and unstrung the lights, more needles, the tenacious survivors, sprinkled on our shoulders and sleeves. Long gone as it was, still the tree treated me to a waft of balsam-sweet scent as I gripped the trunk and lifted it when Dave freed it from the metal stand. 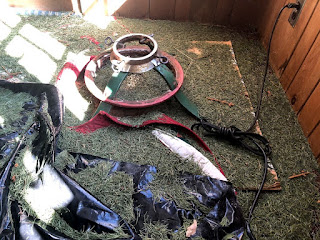 We maneuvered it past the piano and out the door to the screened porch and then the yard, leaving a green scattered path all the way. As I do every year, I was a little teary as I said good-bye and whispered, “Thank you. You were beautiful.”
Posted by Lea at 12:21 PM

You are beautiful! And you make everything magical.

Was I supposed to be teary through most of this?!

So beautifully penned, Lea! And the photo of Eleanor’s tiny digit pointing out a precious detail on the tree is a treasure!

Despite the bucolic scene this evokes, I do think my favorite line is “We trudged up the hills to the edges of the rows, stopping to mull over each other’s finds, diplomatically taking a pass, and continuing on.” (Oh yes, I knew exactly what that looked like....). XO Joanie

Lea, You always get to the most beautiful heart of each moment, this one especially. I love a "winter tree." How lovely and it really shows the passage of time and seasons. Just think, soon you can have a spring... flower(?) for your grandchildren. Each season has its beauty and I love how you capture it all.

This post, and the one about Dave's bread, are a testament to the way you see beauty and love in everyday life. Your ability to express how important this is for all of us is a gift!

Each of these dear posts makes me smile. Thank you friends! I'm so glad this piece struck a chord with you. I DID feel sheepish confessing to our overdue tree! XXOO

Our tree didn't make it past December 26th! I have a picture of Rocco after he wrote JOY TO THE WORLD on the hardwood floor in large letters made entirely of pine needles! Once again, in many ways, your words ring truer than true with me. xox

Oh no! Only Dec. 26th! A short-hitter of a tree! That Rocco! Seeing a piney-opportunity to pass along a hopeful message! XO

Little did you know, Lea, when you contemplated and wrote about removing precious Christmas deco... that soon enough this big pandemic would hit the world hard. We're on to other worries, and we're mostly doing it along. Not a fun time. Christmas feels far away (it is. I write this comment on May 1st) and so different from what we've experienced since. Where did all of that abundance of New Year's cheer disappear to ? Hidden under our Covid masks ? Let's get 2020 back on the right track, carefully. We miss our loved ones and want to hug them soon.... xoxo from Mere

I want to share a testimony on how Le_Meridian funding service helped me with loan of 2,000,000.00 USD to finance my marijuana farm project , I'm very grateful and i promised to share this legit funding company to anyone looking for way to expand his or her business project.the company is funding company. Anyone seeking for finance support should contact them on lfdsloans@outlook.com Or lfdsloans@lemeridianfds.com Mr Benjamin is also on whatsapp 1-989-394-3740 to make things easy for any applicant.